TT Circuit Assen in the Netherlands is also called the “Cathedral of motorsport“. In this article I tell you the history of this famous race track, best known for the Dutch MotoGP Grand Prix. From the first version of 1925 to the 1926 – 1954 street circuit. And from the drivers strike during the opening of the new circuit in 1955 to the current permanent circuit and its lost sections.

The origination of TT Circuit Assen

In 1924 the Dutch government decided to change a law to make it possible to organize races on public roads. The first time this happens was on July the 11th 1925 when a motorcycle race was organized on the triangle Rolde, Borger, Schoonloo near the city of Assen in the East of the Netherlands. Carefully they called it a “non stop endurance tour”. 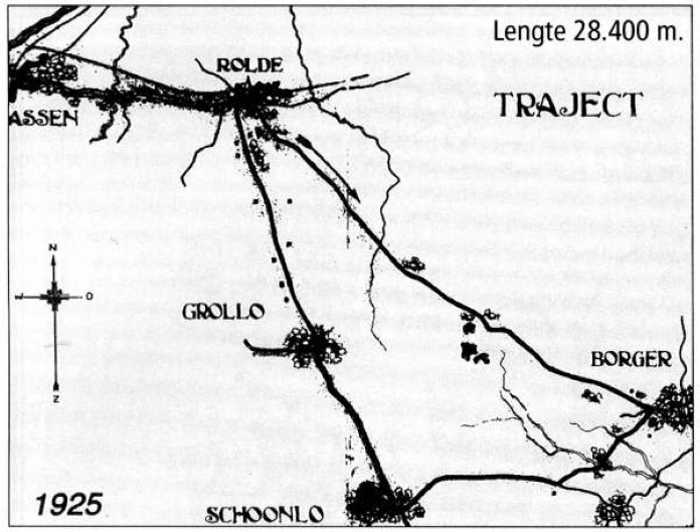 The track was 28.4 km (17.75 Miles) long and contained long straights and fast kinks. However, we have to notice that the track was very narrow and some parts were unpaved. There were also two small bridges in the track who were so narrow that they had to cross them one by one. 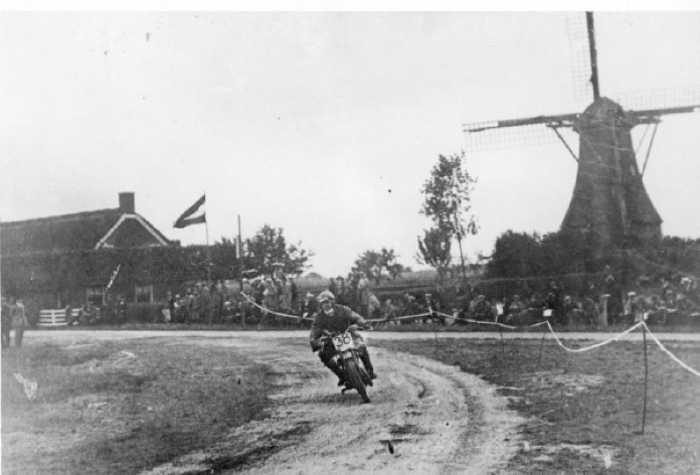 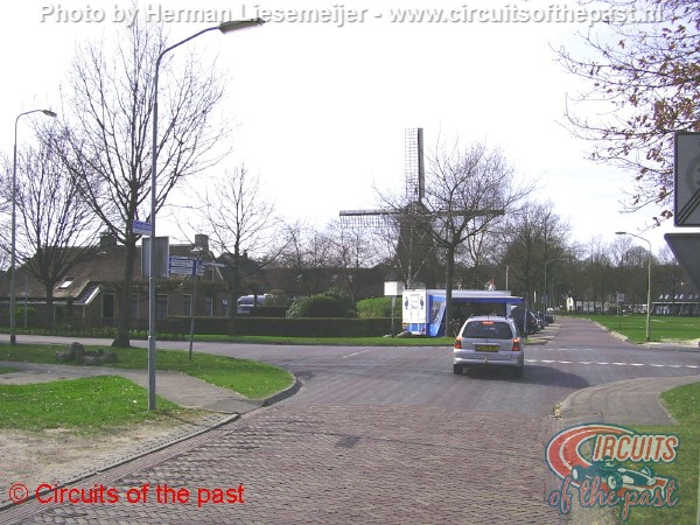 The first ever motor race in the Netherlands in the 250 cc was won by Arie Wuring, a Motorcycle Dealer from Haarlem, with an average speed of 67.3 km/h (42.06 Mph). About 10,000 spectators, not yet used to speed at that time, were lyric enthusiast afterwards.

Video from a lap at the 1925 track today

The next race on a “new” TT Circuit Assen

After this successful event it was clear to the organizers that this should become an annual event. But to give green light for the 1926 race some improvements to the track were required. The local government of Borger didn’t want to spent money for road paving. So the organizers were looking out for a new course. 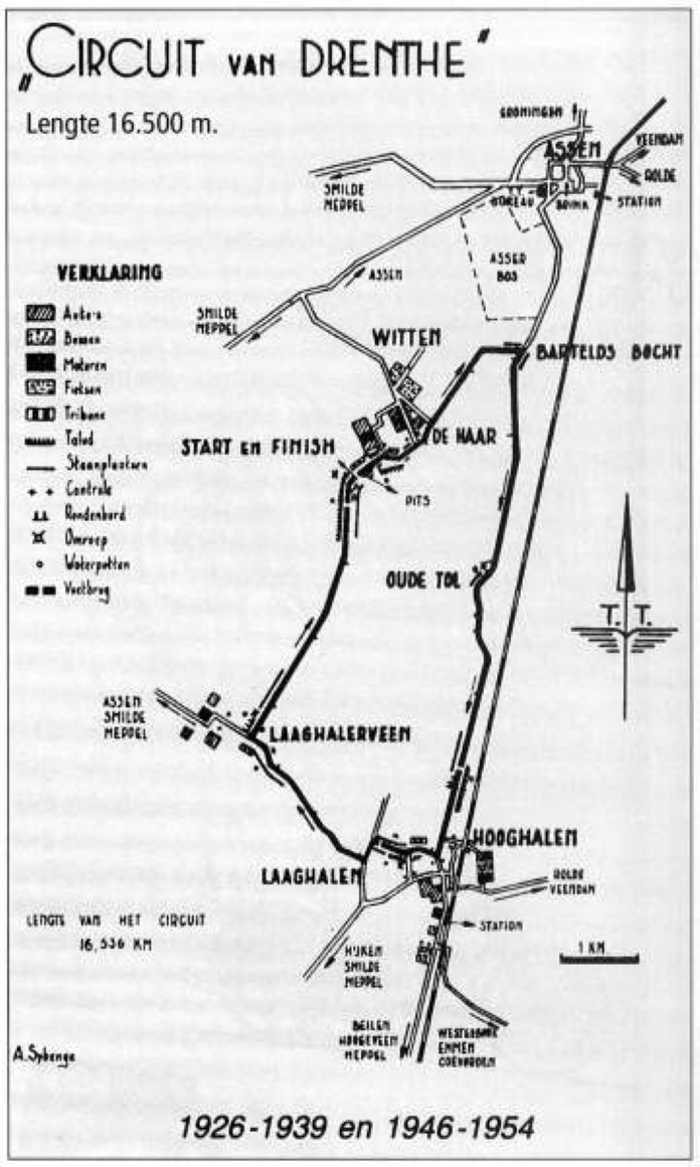 More close to Assen a new course was found in the rectangle Assen, Hooghalen, Laaghalerveen, Assen which was full paved. However, a part was paved with bricks as many roads were at that time.

On June the 26th 1926 the second TT (Tourist Trophy) took place at the new TT Circuit Assen. Unfortunately there were less spectators than the organizers expected and the event closed with a negative saldo of 5000 Guilders.

But lucky for all Dutch motorsport enthusiasts, the “Men of Assen” (which was the nickname for the organizers) didn’t give up. The Royal Dutch Motorcycle Association KNMV supported them and gave the event an international status to make it possible for foreign drivers to race at Assen. 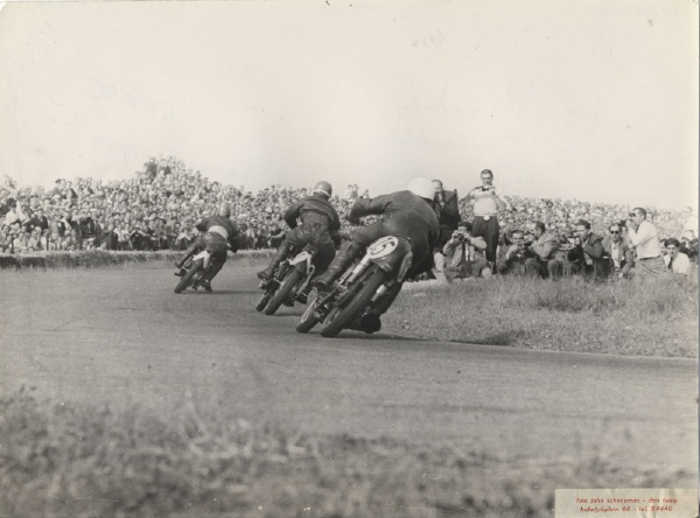 The official Dutch TT since 1936

In 1927 15,000 spectators came to the event which was a huge crowd at that time. During the next years spectators came in bigger numbers every year. In 1930 the TT of Assen gets the status of “Classic Event” from the FIdCM (now the FIM). The name “Dutch TT” was officially registered in 1936. From that moment TT Circuit Assen was the only place outside Great Brittain who was allowed to use the name TT. 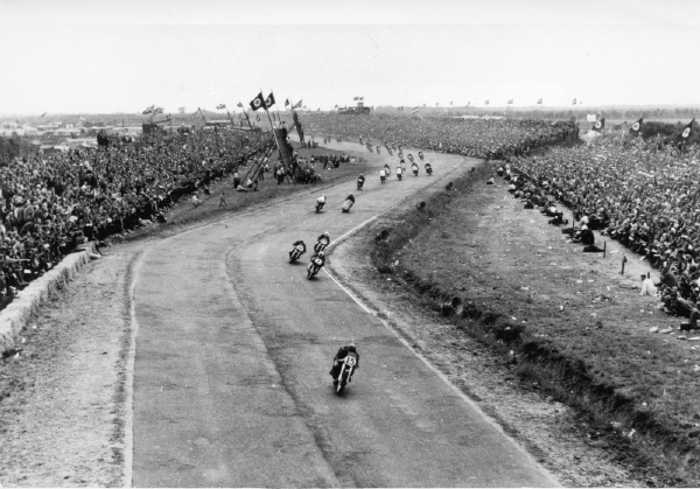 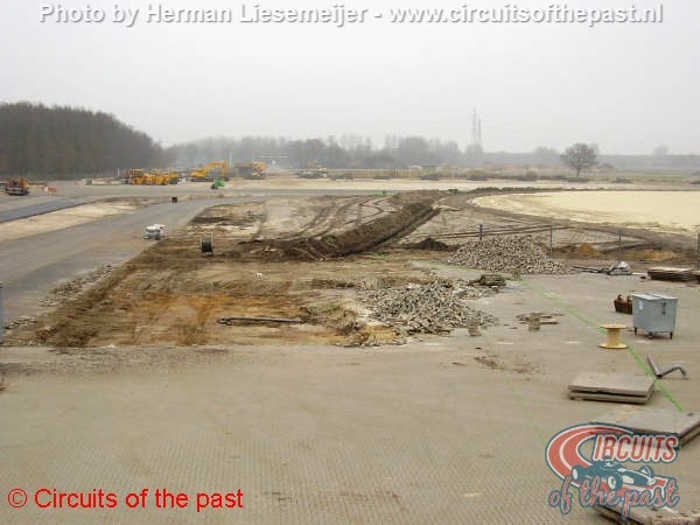 Since 2006 the S-Corner has dissapeared, at this site is now the new Haar Corner (the first corner of the new TT Circuit Assen).

During the years improvements had to be made to the track like a new surface, better facilities, more grandstands, a speakers installation and the track was widened two times. But they never changed the lay out of the track. 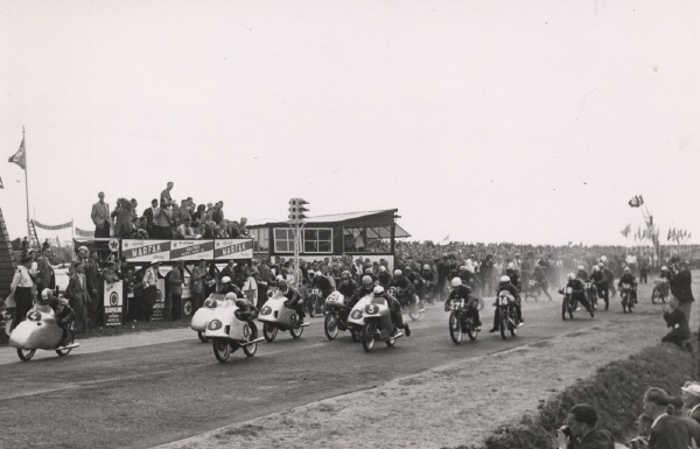 During the fifties the organisation decided that a brand new circuit was necessary. There are different opinions about the motivation for this.

The official reason was that the 16.5 km long track was not longer suitable for motorcycle races due to the construction of a new road from Assen to Hooghalen. But unofficial sources told that the local government of Assen would no longer share the profits with neighbour town Beilen, a part of the track was laying on the territory of Beilen.

When in 1955 the new TT Circuit Assen, which was complete on the territory of Assen, was opened some angry people of Beilen predicted that it should be all over for the Dutch TT very soon. Probably this was what they wished… 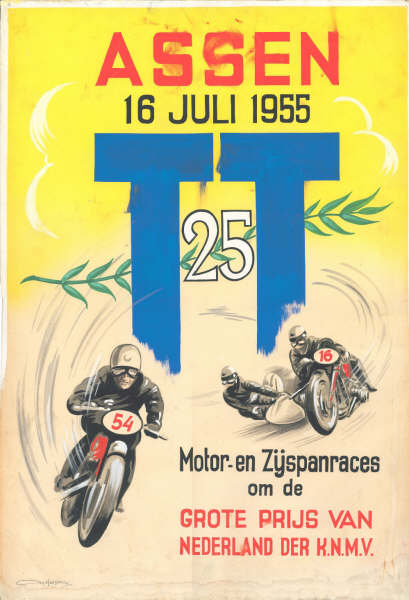 The inauguration of the new TT Circuit Assen

After 29 years it was time to say goodbye to the old circuit with the famous corners “Bartelds Bocht” and “Oude Tol”. The new TT Circuit Assen was “just” 7.705 km (4.8 Miles) long and was the basis of the current circuit.

The new TT Circuit Assen was constructed in a record time of less than four months. That’s why they called it “The miracle of Assen”. During the first Dutch TT on the new track in 1955 the organisation was confronted with a drivers strike!

After the drivers of the 500 cc class, the current MotoGP class, did a warm up lap at slow speed and saw how much spectators there were they decided to claim more start money. Fortunately for the spectators, drivers and organisation came to an agreement and the race could go ahead. 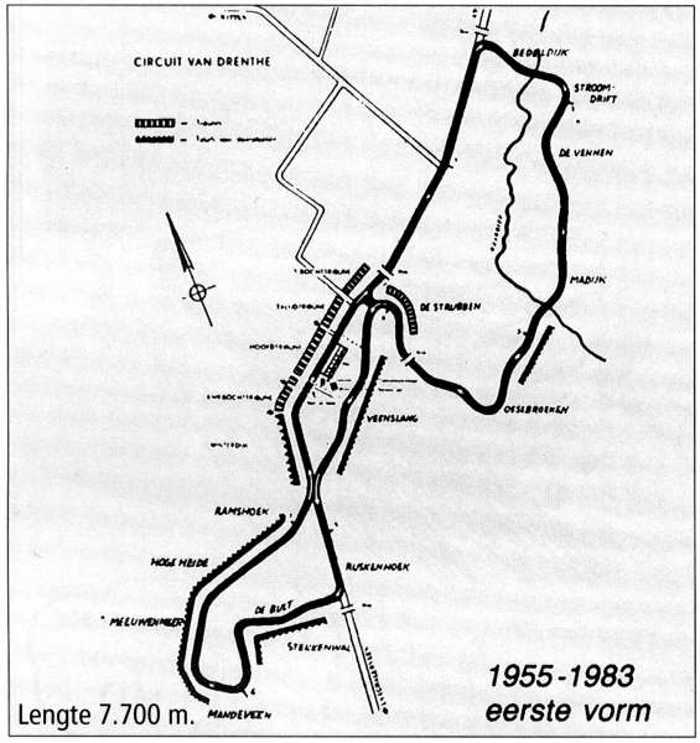 For the new TT Circuit Assen they used the same Start/Finish area which was public road. Today the Start/Finish is still at the same place but the whole circuit is now permanent.

Two new loops were constructed, the North Loop and the South Loop. To connect these two loops they constructed a fast new section, the “Veenslang”, parallel to the main straight. This about 1 km (0.625 Miles) long section was a sort of copy of the local public roads with fast kinks, most of them were full throttle, which was a special sensation for the drivers.

Partically the last kink of this section, the “Ruskenhoek”, was a big challenge. Here they also enter a part of the old track which was originally driven in the opposite direction (see the map above). Today this part has been changed dramatically and lost much of its old glorie.

Because a part of the circuit was still public road the whole circuit was open when there were no races. So many people took this opportunity to drive at TT Circuit Assen. To be frankly, I was one of them.

After some grave accidents happen, even a few fatalities, during these illegal “Track Day’s” the local government decided in 1992 to close the road and make the semi street circuit a permanent race track. 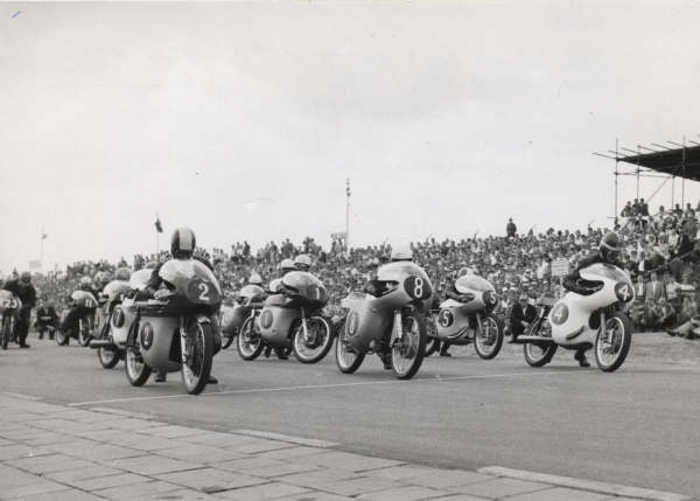 The danger of illegal circuit driving…

In 1990 the circuit was closed for a while for renovation works. Short after the works I went to Assen for a visit. The gates to the circuit were half open and there was a “no trespassing” sign. Before I would enter the circuit illegal I first want to check what the risk was to got caught. So I drove around the circuit to the entrance at Stekkenwal Corner.

That entrance was also half open with “no trespassing” sign. Here a couple of men looked to the circuit. On the track were some road cars driving at high speed. I parked my car, went to the men and asked if they were from the TT Circuit. They confirmed and I told them that I often drove on the track, and asked if I could do some laps. That was no problem for them, if I would behave.

Delighted with that permission I enter the brand new asphalt, which felt a little slippery. But now I finally had the chance to do a full lap at high speed, without worry about oncoming traffic. At least that’s what I tought… I entered the fast Ramshoek Corner with the idea to take it full throttle. Full throttle meant with my Opel Kadett a top speed of 130 a 140 Km/h. That was no problem if there wasn’t a ghost rider on the track! Halfway the corner I saw him right in front of me.

Someone ignored the “no trespassing” signs and drove through the half open gates, to enter the circuit in the wrong direction. With squealing tires I could avoid him. I was lucky I didn’t had a faster car that day. Then it would have been a much different story… This was the most terrifying moment I ever had on a race track, while my “racing career” just started.

This was a passage from my Ebook “The Magic of Weathered Asphalt”. Click here for more information about this Ebook >> 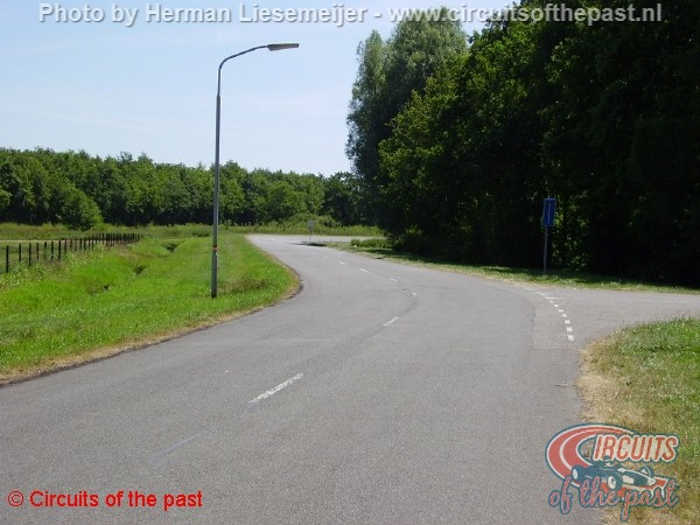 Changes to the new track

The most modified part of the new TT Circuit Assen is the North Loop. In 1984 this part was halved which made the complete circuit almost a Mile shorter. Great corners like “Bedeldijk”, “Stroomdrift” and “De Vennen” were dissapeared. 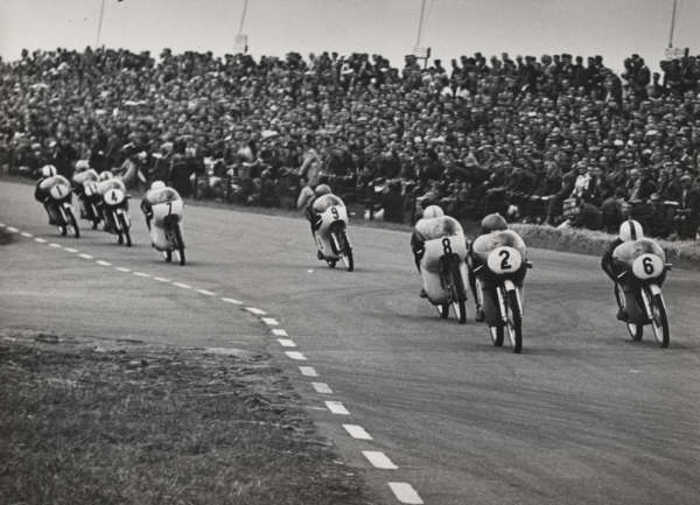 At the end of 2005 they started a huge project to build an amusement park on the North side of the circuit. To create space for this project the remaining part of the North Loop was demolished and replaced by a small stadium section.

Two laps on both versions of the current TT Circuit Assen.