Have you ever heard from the Prinzenpark Street Circuit in the German city of Braunschweig? In this article guest blogger and local from Braunschweig Yannik Haustein tells you about this lost circuit in his home town…

The origination of the Prinzenpark Street Circuit

When thinking about Germany and racing, the first places that come to mind for most people are usually Nürburg, home of the legendary Nürburgring with its incredible Nordschleife. Or Hockenheim, Klettwitz with the Lausitzring or, when it comes to street races, Nuremberg and its Norisring.

The latter is a bit of an outlier these days, as street tracks are very rarely found in Germany. That used to be different, though, and this is where the focus of this article comes into play… Prinzenpark in Brunswick, called Braunschweig in German, in Lower Saxony. It played host to the Prinzenparkrennen from 1948 to 1951. The track is still visible in its entirety today. Though nothing indicates that bikes and cars once used to race here.

Located about 25 kilometers (roughly 16 miles) to the southwest of Wolfsburg, Brunswick is close to one of the largest car manufacturers in the world with the Volkswagen factory calling Wolfsburg its home. Yet, there is basically no motorsport heritage to be found in the area – or so I thought.

Right after World War II, Brunswick was – like many other cities – mostly reduced to rubble. British air raids, particularly the one on October 15th, 1944, had taken their toll, with most of the historic city center having burned down.

After the war was over, the city was under British occupation. Brunswick’s residents quickly set out to rebuild what was left of their hometown. And soon, pre-war racers wanted to go fast again.

It took a lot of convincing with the British town commander to make it happen. But Heinz Irrgang, Albert Himstedt and Kurt Kuhnke made it happen. Brunswick would be the site of the first closed-course race after the war!

However, the Prinzenpark in the east of the city, was yet to come into play. For the premiere of the “Großer Preis von Braunschweig”, racers had to tame a course laid out on the Autobahn in the northeast of the city.

The big draw of the Autobahn races were the motorbike competitions: Racers from all over Germany were invited – without the hosting DMV even knowing who survived the war and who did not – and showed up for the first iteration of the race on August 4th, 1946. It was not just enthusiasts, however: Among the starters were former European champions Georg Meier and Heiner Fleischmann.

The 1946 event proved to be a huge success, and so was the 1947 race, even though it was almost canceled. Local government said “nein!” because of a fuel shortage. The Brits made sure the race could happen though, and offered oil to use. Small sportscars joined the bikes for the event, and it was Brunswick where the first race car produced at the Volkswagen factory (called VLK) took its first win, being driven by local hero Kuhnke.

For 1948, the race had to move despite being an enormous success with up to 40.000 spectators. The problem was the Autobahn: It had to be closed for the race. But since the A7 was rather important for going east (where the border between the two German states was not far), it was deemed that it was not viable anymore to close the Autobahn for days at a time each year.

The track basically consisted of two long straights connected by hairpins, a bit like a mini AVUS, in 1946, while in 1947, the on- and offramps on the eastern end of the track, were incorporated into the layout.

A city park coming to the rescue

Luckily, a replacement track was found relatively quick. The Prinzenpark in the east of Brunswick offered enough space and roads to lay out a track there. It was an interesting circuit that must have been a blast to drive or ride back in the day.

The start/finish straight, located on Herzogin-Elisabeth-Strasse, was about 840 meters (2755 feet) long and lead to a 90 degree turn onto Riddagshäuser Weg (now known as Georg-Westermann-Allee). 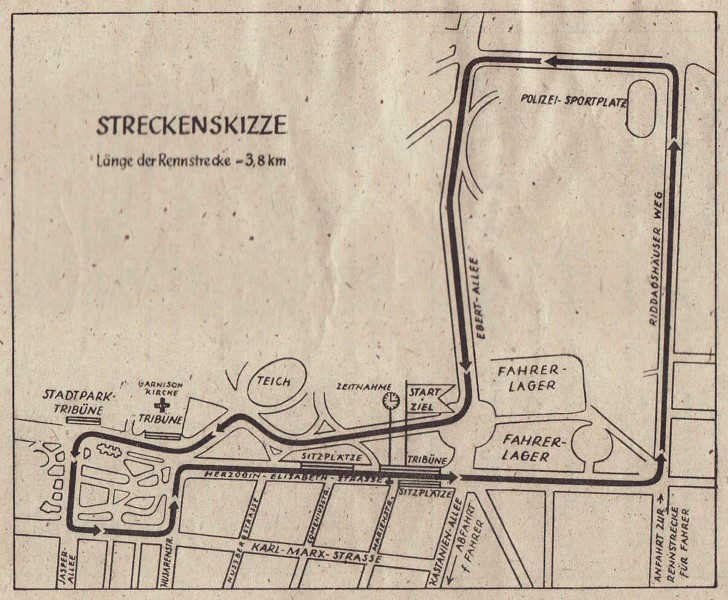 Another long straight led to another 90 degree left. A short straight past the Polizeistadion, a sports field, and another left later, racers turned onto Friedrich-Ebert-Allee. From this slightly crooked straight, they turned right into the actual Prinzenpark, using its roads until rejoining city streets at Herzogin-Elisabeth-Straße. Three more lefts and a right brought them back to the main straight.

All of these roads are still there today, and doing a lap of the old circuit is still possible. Although not by car! Since the roads inside the park have since been closed for traffic and repurposed as pedestrian walkways and a track for running. So it’s best to walk, bike, use inline skates, a skateboard. Whatever you like.

The races at the Prinzenpark were immensely popular. With the track being much closer to the city center, spectators had easier access and great viewing points. The main event still were motorbikes, joined by the small sportscars that had raced on the Autobahn as well. Even open wheel racing found its way to Brunswick, as Formula 3 raced there in 1951 and 1952.

The end of the Prinzenpark Street Circuit

By then, the circuit had been slightly altered. After a big sidecar motorcycle crash that injured three specators, the final part of the track that went around the smaller Stadtpark was abandoned, with the track now rejoining the main straight by a hairpin right on the edge of the Prinzenpark.

However, this did not quite spell the end of racing in Brunswick. As a replacement, the race’s initiators drew up a circuit just a few hundred meters east of the former Autobahn track. This triangular shaped circuit used country roads, passed no villages or cities and was about 3,9 kilometers (roughly 2.4 miles) long.

Here, between the villages of Wendhausen, Lehre and Essehof, the race was on – after being forbidden by local government at first, eventually being given the green light for the October 26th event. The race was now called “Dreiecksrennen” (triangle race).

Conditions were not ideal, though. The country roads were narrow. While this was not a problem for the bike races, cars had to start one after another, 20 seconds apart, similar to hillclimb races, effectively running against the clock.

For the 1953 event, this problem was addressed. The roads were widened so cars could start all at the same time. The event, now in its third location in seven years, was a success again, drawing between 12.000 and 20.000 spectators.

Still, it was the last of these races to date in Brunswick. Local government was against including parts of one of the roads. So the neighboring villages decided to try and build a new main straight and felled trees in a parallel line to the existing road to make way for it.

The new, now permanent circuit was supposed to be called “Welfenring”, but due to financial reasons, it never materialized. Thus ended Brunswick’s racing history.

Memories to the Prinzenpark Street Circuit

In recent years, there has been an exhibition in the old town hall, specifically remembering the Prinzenpark race. Nowadays, nothing points to the racing heritage of the three former circuits. They are all still there, but if you do not know they were racing tracks, you would never guess – which is a shame considering the role these races played in revitalizing motorsport after the war.

If your German is good enough, I strongly recommend Eckhard Schimpf‘s book “Prinzenpark” about Brunswick’s racing history. Schimpf witnessed these races in person as a boy and later went on to become a driver himself, working as a journalist and author afterwards. His book helped immensely with writing this article.