It was Monday August 2, 2016 when I drove from my hotel in the center of Berlin to the old AVUS street circuit. It was the last circuit on my 2016 Circuit Tour through Germany. Once before I visited the AVUS. That was in 1999 when I only made some pictures of the Nordkurve. This time I would film the complete AVUS Berlin. 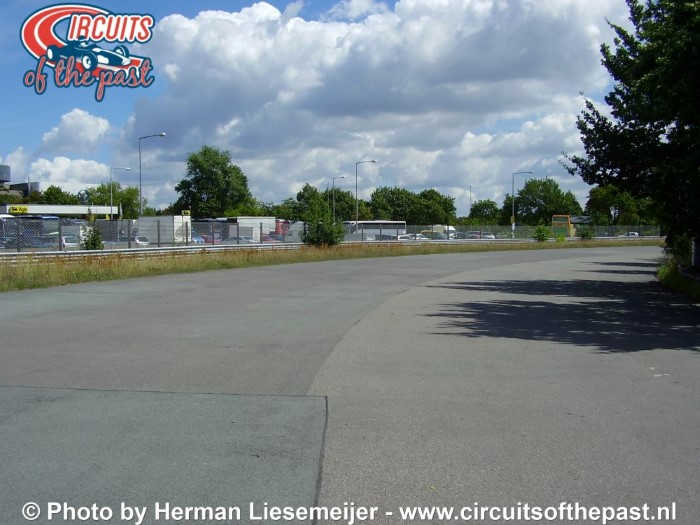 The old Nordkurve of the AVUS Berlin

I started on the location of the old Nordkurve (North Corner) of the AVUS Berlin. From 1937 to 1967 was here the famous banking, which was demolished for safety reasons. A fence is open so I could enter a part of the flat Nordkurve by car.

This area is now a storage for containers. I park the car behind the fence and start with a “Track Walk”. With running camera I walk over the other part of the Nordkurve, which is not accesible by car.

I step over the guardrail which is disposed transversely across the track. This part is still recognizable as a race track, complete with guardrail and safety fences. Actually, it was a permanent section of the street circuit.

If they want they could use it again. However, on the inside of the corner the vegetation start growing through the cracks in the surface. While I film it someone asked me if I lost something. I tell him that I film the old race track.

At the end of the corner there is another guardrail transversely across the track. I could easy step over it but than I would enter the freeway, which is not such a good idea. From here I film the grandstand on the other side. 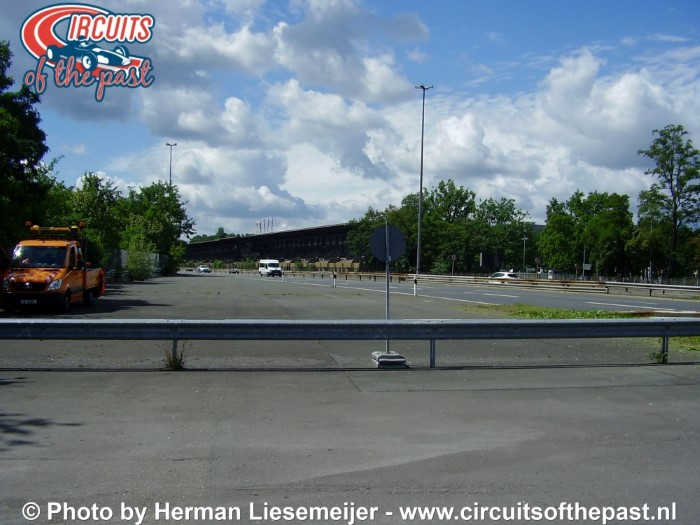 I also film the guradrail on the exit of the corner. In 1990 Dieter Quester hit this guardrail in the last lap of a DTM race. He flipped and slided upside down over the finish where he got the checkered flag and became third.

More about the history in the main article of the AVUS >>

Walking back I bring a short visit to the motel in the former AVUS Berlin Control Tower. In 1999 I spend my first night in Berlin here. But now the motel seemed to be empty. The entrance was locked. From the stair in front of the entrance I make a nice shot the Nordkurve. 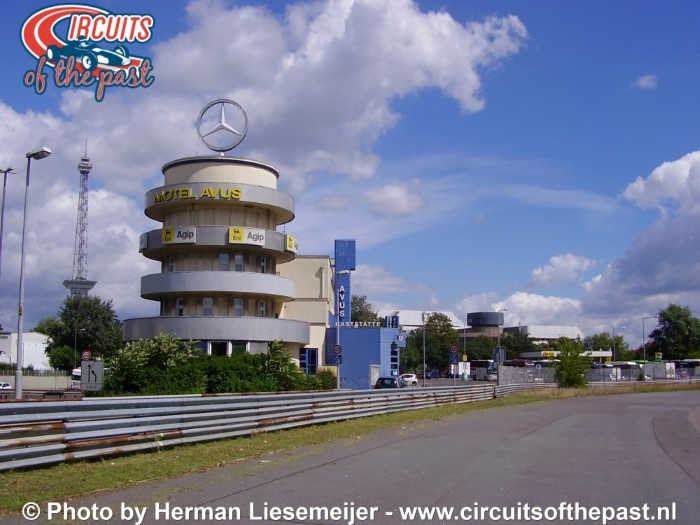 Back by the car I mount the camera behind the windscreen for the onboard part. First I drove in opposite direction as far as possible. Near the remains of a chicane I turn the car for a ride in the right direction. The chicane was built after the tragic accident during a touring car race in 1995 that took the life of Kieth O’dor.

The abandoned grandstand on the Autobahn

After filming the Nordkurve I drove to the abandoned grandstand on the other side of the Autobahn (freeway). While looking for a parking I see two men taking pictures of the grandstand. I park my car on the site of the old toll house of the AVUS Berlin. 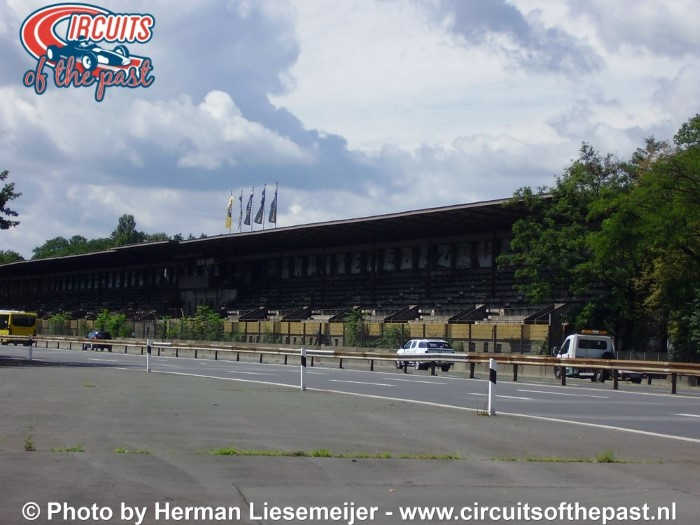 Walking to the grandstand I meet the two men and talk to them in German. When they answered in English I switched to English too. They told it was not possible to enter the grandstand and warned me to be carefull while the police is very alert. Then they showed me a photo end told me where they made it.

That spot was edged with barbed wire to prevent people from climbing on the grandstand. It seemed some graffiti artists still managed it, witnessed the “street art” inside. I had to stretch myself to get the camera in position for an image of the interior of the grandstand. Then I made some shots of the passing traffic on Start/Finish and the back side of the stands. That was all I could do here.

After filming around the grandstand I walk back to the car. I see the two man again, waiting for the bus, and made another little chat with them. They are from Denmark and I tell them about this website. When I give them my business card of the website they have also a business card for me. They have also a website, about photography. Unfortunately I lost their card, otherwise I would have contacted them afterwards. 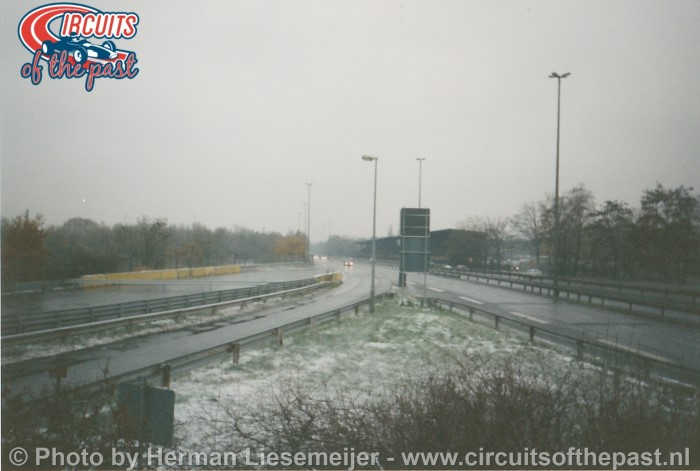 Too much traffic on the AVUS Berlin

Again I mounted the camera behind the windscreen and enter the Autobahn for a 6 Miles ride on the long AVUS straight to the location of the original Südkurve (South Corner). Unfrtunately there is a speed limit of 100 Km/h here that made the traffic drove close to each other.

I tried to drove there where I had the most sight, but slow overtaking vehicles blocked the view many times. Moreover, I was determined to be on the right lane halfway the track to film the remains of a later version of the Südkurve.

After a somewhat frustrating ride I arrive at the exit Spanische Allee and leave the Autobahn. Here was the original Südkurve which was in use from 1921 until just before the outbreak of World War II.

According to most sources, this was until 1939, when the last pre-war races occurred. But there are sources that claim that the corner was already demolished in 1938, to connect the AVUS Berlin to the expanding network of freeways.

When the famous banked version of the Nordkurve opened in 1938 they already planned a second banking to replace the Südkurve. But when World War Two broke out in 1939 the works on the new Südkurve stopped and never resumed. What remained was an open space in the woods and an earthen wall.

A secondary road parallel to the AVUS Berlin leads to the site of the proposed Südkurve. The last part of this road is a so called “Waldweg”, which means no motor vehicles are allowed, with the exception of permit holders.

But it’s a wide road, so I would not obstruct anybode when I enter it by car. I decided to take the risk of a fine and followed the road. On Google Earth I looked for the site and I knew I should look out for an empty space in the woods, about 600 metres from the beginning of the Waldweg.

A “most polite” cyclist…

With low speed, and looking for an empty space or an earthen wall, I drove on the Waldweg. But as always it looks more easy on Google Earth than in real. When I see that I’m over 600 metres from the beginning I make a U-turn. Even slower I drive along the forest edge. Then suddenly I see a path that could lead to the empty space.

At the same time I see in the interior mirror a group of cyclists come closer. To alert them that I’m going to stop, I turn on the hazard lights. I park on the roadside in order not to hinder them. But one of those cyclists found it necesarry to gesture that I’m crazy. I think this action says more about himself…

When I step out of the car a group of forest workers just arrive. I ask them if they know about the unfinished corner of the AVUS Berlin. They work here so they should know exactely where it is, I tought. But they had no idea what I was talking about. One of them told me there is an old shooting range not far from here.

I walk over the path I saw from the car and indeed, I enter an open space. This must be the site of the proposed Südkurve. After I filmed the empty field I went looking for the earthen wall. I found two earthen walls, so I filmed both. Back home I localized them and came to the conclusion that one of them was the exit of the Südkurve. I also discovered that the American Army used this site as a shooting range short after the war. 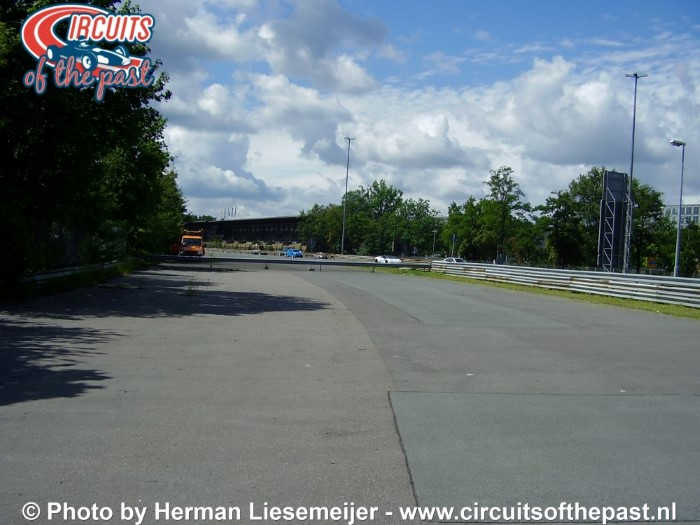 Moreover, I discovered that I was a little misoriëntated and that there was even more to see. Behind the other wall was another empty space and at the end of that space was the most intersting part of the unfinished banked Südkurve. With that knowledge I must go back for sure!

Back to the Nordkurve

Then I drove back in the direction of the Nordkurve, to complete the lap at the AVUS Berlin. It was still busy and I tried to find the open spaces as far as possible, to film the road as good as possible. After 6 Miles I need to exit. Here I should be very carefull because I must be exactely on the right lane at the right moment to film the entry to the Nordkurve. Unfortunately, the traffic moves here together which made it more difficult.

When approaching the Nordkurve I slow down a little and create a gap between me and the car in front. It was just enough to have a shot of the entry of the Nordkurve. That completed my lap at the AVUS Berlin, which was also the last circuit on my Circuit Tour through Germany. 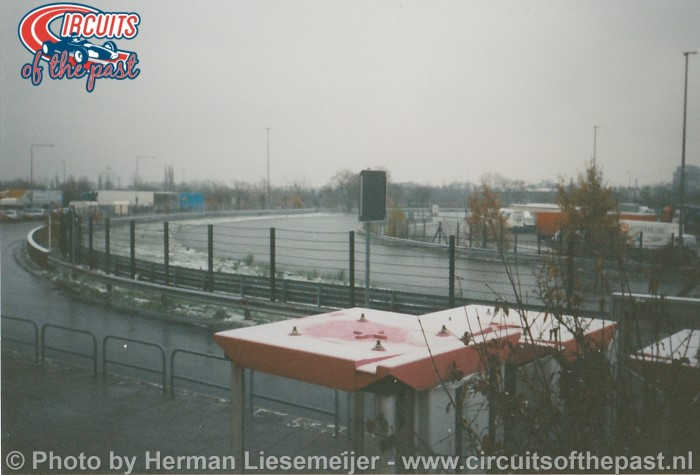 I hope you enjoyed my blog post about my visit to the AVUS Berlin. If so, comments are welcome! 😉