Donington Park is a race track that has been on my wish list for a very long time. In the summer of 2018, the time had finally come. And what a visit it would be! As a “press dude” I got a golden threatment and I was driven around at high speed with the Safety Car, which almost crashed…

Donington Park is a race circuit located near Castle Donington in Leicestershire, England. It opened in 1931 and is now the oldest operational circuit in the United Kingdom.

From 1971 to 2006 it was owned by business man and car collector Tom Wheatcroft. Today it’s part of the MotorSport Vision Group from old Formula One driver Jonathan Palmer. 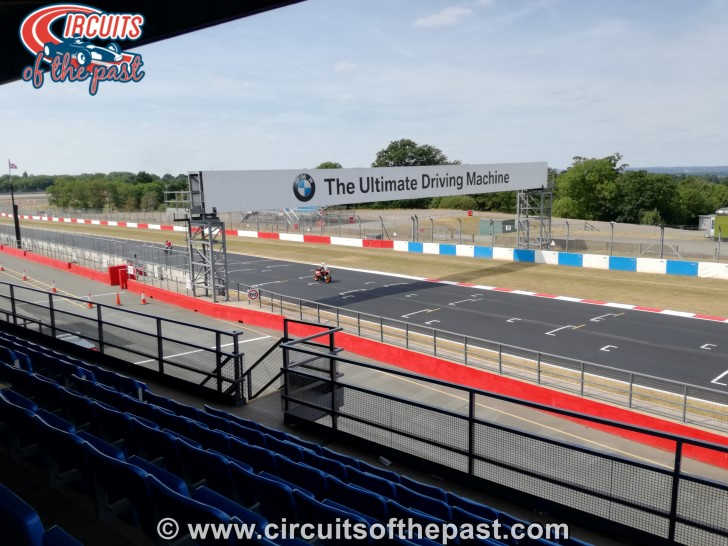 A cool thing to tell is that Jonathan Palmer drove the first ever Formula 1 car I ever saw in action for real (so not on TV). That was during the first ever Marlboro Masters of Formula 3 at the Zandvoort Circuit in 1991. During the event he gave a demonstration with a McLaren, the team he was test driver for those days.

My memories to Donington Park

Already since the late 1980’s I know Donington Park from TV. The beautiful layout quickly appealed to my imagination. Unfortunately I also saw less beautiful things on the track. I remember when a formula car crashed and broke in half. A spectator was hit by the unhinged engine and died.

A very nice memory is the legendary Formula 1 European Grand Prix in 1993. In a fantastic rain race, Ayrton Senna declassified the entire field. Unforgettable is the opening lap in which he drove to the head of the field after a bad start. In the Melbourne Hairpin he took over the lead from his rival Alain Prost.

On Wednesday, July 25, I had an appointment at the Donington Park Circuit. I had spent the night in a Bed & Breakfest just a stone’s throw from the race track.

Because there was a non stop event, I had to wait until 5 o’clock before someone could drive me around on the track. That is why I started the day with a visit to the Donington Museum, with the Grand Prix collection of Tom Wheatcroft.

What I didn`t know at the time was that this museum would close it’s gates for good on November 5, 2018. I am very happy that I have been able to visit it.

The museum visit took almost the entire morning. After I had admired the very extensive collection of race cars from different eras, it was time to visit a restaurant. I let the navigation search for the nearest restaurant, which turned out to be at the local airport.

After lunch I went back to the circuit. I still had to wait a few hours, but the circuit was open to the public that day. There was a driving training for motorcyclists. Meanwhile I could watch the circuit from the outside.

As agreed, I arrived at the reception at 5 o’clock. A little later came also the man who would drive me around the circuit. “Who’s the press dude?” he asked.

We took place in the Safety Car and via the Melbourne Hairpin we enter the track. While talking through the onboard radio, he drove a slow lap around the circuit. Just after the last bend he stopped and talked with the control tower.

“Okay?” He suddenly asked. “Yes” I answered, on which he began to accelerate. At race speed he drove me three laps around the circuit. When we arrived at the Old Hairpin, during the first fast lap, he even skid away into the grass.

Where most people are scared when they are a passanger during a fast lap on a circuit, I stayed cool and kept filming everything. In the nineties I was an amateur racing driver, so I know what is possible with a car. The driver may have thought ” I do not get him scared “.

After the fast laps I was joking about the exit in the Old Hairpin. “Cold tires” was the driver’s comment. I was referring to a crash that Nigel Mansell had there in 1993, during the Toca Shootout. “Oh yeah, with the Ford Mondeo,” he replied. He was well informed.

Then we went to what he called “the herritage part”. The old Melbourne Loop with the bump were they get airborned. Unfortunately, this part is no longer connected to the circuit. Between today’s Melbourne Hairpin and this old part is now the reception building, where I had to report.

At high speed, the Safety Car Driver drove me over the old loop. Just like the 1930s GrandPrix cars, we almost get airborne. At the lowest point is still the old Melbourne Hairpin.

Confusion about the layout

When we went back uphill, I expected him to drive in a straight line to the fence that bounded the old part. But by contrast to the layout I knew from old maps, he turned left.

Via an extra loop we ended up at the aforementioned fence. After we drove this course a few times at high speed, I asked him about this layout. According to him, that was the traject that was used during the pre-war Grand Prix (1937 & 1938). I later searched for this layout, but could not find it anywhere.

After we had done a slow lap with photo stops on the old Melbourne Loop, he took me to a small square. It turned out to be a “circuit” for Banger Racing. The square was strewn with broken mirrors and pieces of bumpers. On the Banger Track he did some drifting and turned some donuts.

That was the end of a fun day at Donington Park. In the evening I drove to my next hotel. A few days later I would visit no less than three circuits in one day! Starting at another cool circuit, Oulton Park…

So far about my cool visit to Donington Park. What are your memories to this great race track? Share them in the comments!