Imola Circuit, April 30, 1994… On this day 25 years ago Roland Ratzenberger lost his life during qualifying for the Formula One San Marino Grand Prix. A day earlier Rubens Barichello had a serious accident but escaped.

The next day, May 1, 1994 is engraved in the memory of every motorsport fan… That day Ayrton Senna lost his life during the race. Since then, this tragedy has been associated with the name Imola. In 2007 I visited the Imola Circuit. Below the report I wrote about that day… 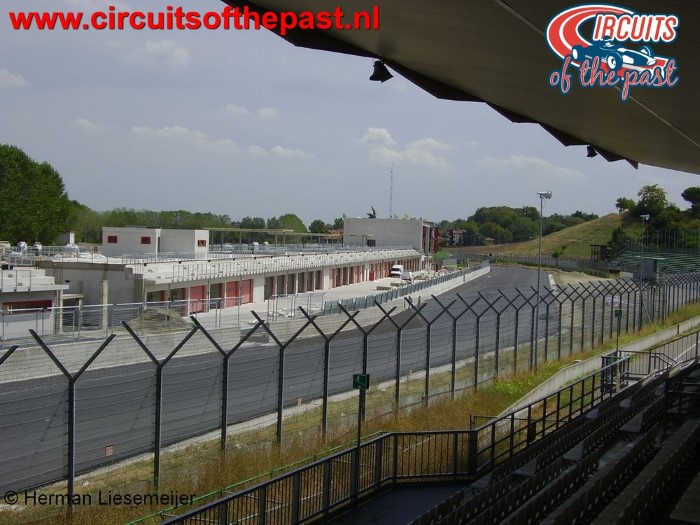 It was August the 10th 2007 when I was underway from Peschiera del Garda to Rimini, during my summer holiday in Italy. In Rimini I would look for a hotel, and from there I want to make some trips to the old Pescara Circuit and the republic of San Marino. But first I would visit the location of the former Formula One San Marino Grand Prix.

Short after Bologna I leaved the highway on the exit to Imola. Immediately after I paid at the toll gate I saw a sign with Autodromo. A road with the curious name “Via 1° Maggio” (Street of the First of May) was leading to the circuit.

Just before you enter the circuit area, you can choose between the directions Tosa and Rivazza – Paddock. I choose the last one. After a longer ride as expected, I arrived at the circuit near the Variante Alta and the Aque Minerali, where I made some pictures. 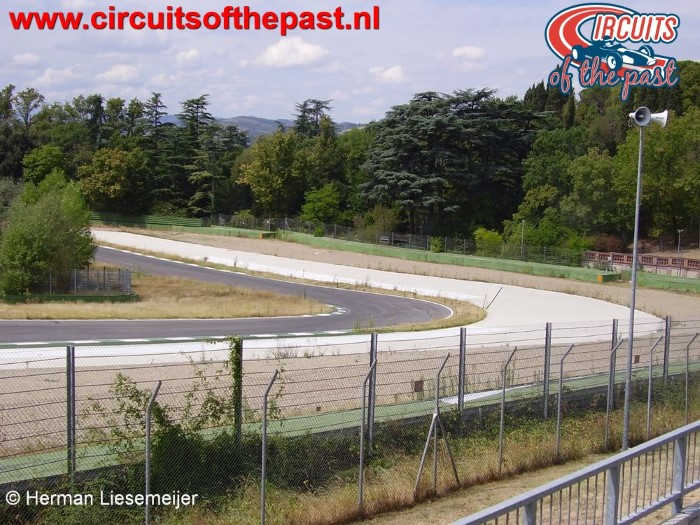 The curious layout of the Imola Circuit

Very remarkable are the buildings close to the circuit. There are normal houses inside the race track! Once the circuit of Imola was a semi street circuit, the section from Rivazza to Tosa was originally constructed as a public road. But just like at Spa-Francorchamps and Assen, they turned the public road into a permanent circuit. Usual the ground at the inside belongs to the circuit, but at Imola it’s public domain. Every service road from the track is leading to a public road. You can compare this situation with the Nürburgring Nordschleife, only smaller.

After I took some pictures of the Aque Minerali I went back to the car and drove to Start/Finish. When you enter the ground behind the main grandstand you see a huge picture of a waving Ayrton Senna. This picture is placed here in 2004, when the main grand stand was named after him. Yes, Imola will be associated forever with the tragedy that happened here in 1994… 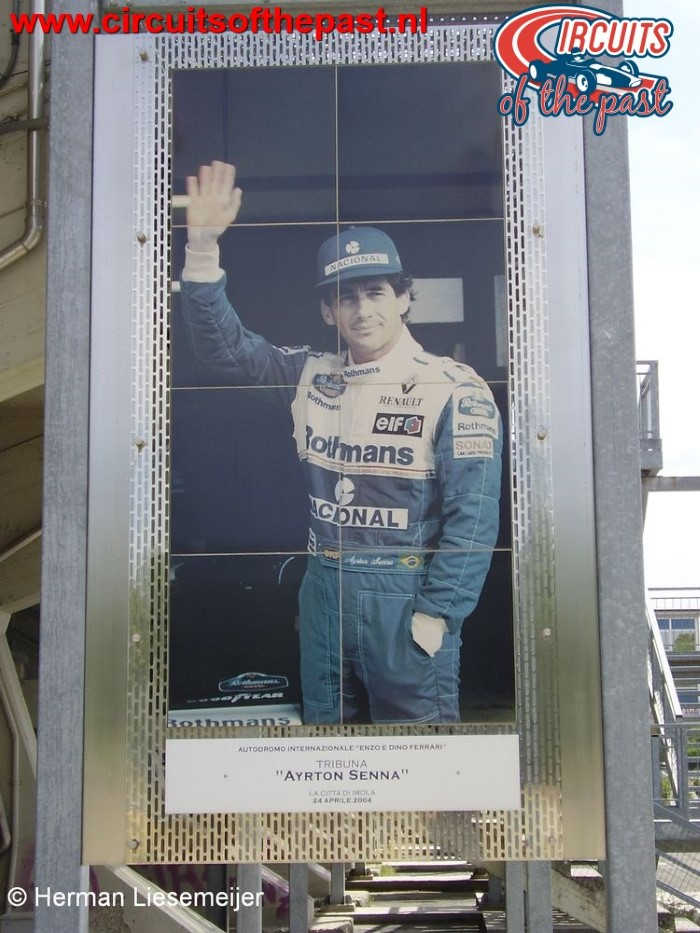 From the Ayrton Senna grandstand I had a good view at the Start/Finish area where they were building a new pit complex. And moreover, they removed the slow chicane before Start/Finish! At this site are now two nice full throttle kinks. This will give Imola a little bit of its old glory back.

As I Said, Imola will be associated forever with the tragedies of 1994. So I also want to visit the Tamburello and the Villeneuve Corner. Because you can’t reach this section by car and because Imola is an extended circuit, I prepared myself for a long walk by a temperature over 30° C. With a camera and a big bottle of water I leaved the parking behind the grandstand.

Through a small tunnel I came to the outside of the circuit. Near the entrance of the paddock I entered an unpaved road between a river and the circuit. At the first sight this is a peaceful park. On the right a river and on the left a race track completely hidden by a fence and trees. After a ten minute walk trough the nature I was petrified when I saw a fence with flowers, pictures, letters and an old T-shirt. I was arrived at the site where Ayrton Senna had his fatal accident. 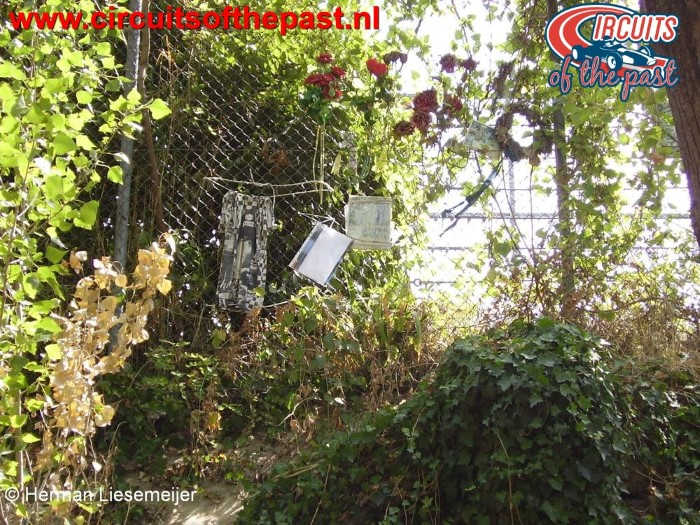 When I made the first picture I really realized where I was and the memories to that terrible first of May in 1994 came back. The site where Senna hit the wall is marked with a commemorative plaque which is hard to see because of the trees and bushes in front. In the fence behind the wall someone made a hole to reach the wall. But it wasn’t big enough for me to get through it, at least I tried it. However, I could hold the camera through the hole and made a photo.

When I was ready with the pictures I kept a moment of silence. Suddenly a friendly Italian asked me “Parlo Italiano?” (Do you speak Italian?). Fortunately I speak this beautiful language a little, so I answered “Si, un po”. He told me that there was an official memorial for Senna on the other side of the track. I could enter it by the tunnel at the Villeneuve Corner. After a short chat we both continued our way. He along the river, I along the track.

Arrived at the Villeneuve Corner I walked trough the tunnel to the inside of the circuit. Particularly here I discovered that Imola is not an easy track to photograph. Because the strange combination of a permanent race track and an inhabited area, surrounded with public roads, some parts of the track are not accessible for public.

During race events spectators are concentrated between Rivazza and Start/Finish and at some “isles” at Tosa and Aque Minerali. On the non public areas are fences so high that I couldn’t take pictures over the fences. In an attempt to make some pictures I climbed at a tunnel partition. But unfortunately, even here I saw more fence and bush than circuit. 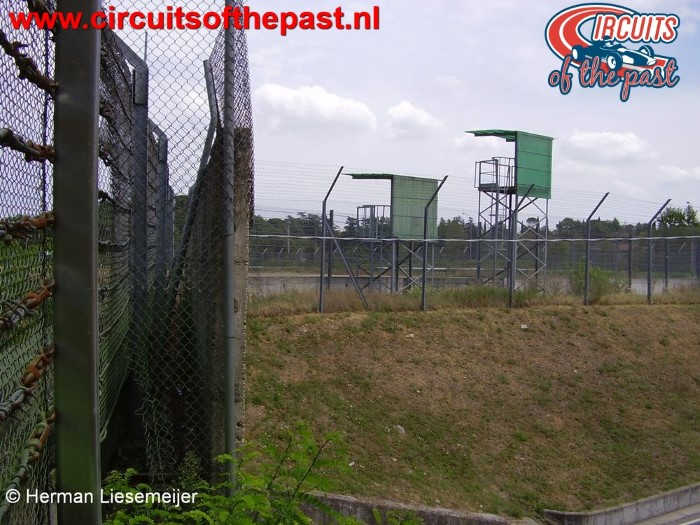 In contrast to the site of Senna’s accident, at the site where Roland Ratzenberger died the day before Senna is no plaque. Another thing is that this section has been modified so much that it’s hard to find the exact location of the crash. Close to the place where this happened is a monument for Gilles Villeneuve. Here I saw some faded flowers in the fence. Where these flowers for Gilles or for Roland?

I continued my walk on the inside of the track back to the direction of Start/Finish. I came across an entrance of a park named “Parco delle Aque Minerali di Imola”. Sounds familiar. The park is situated next to the circuit and is only accessible for pedestrians. I walk trough this beautiful park over a path which is parallel on the track and has the same shape as the original circuit.

The sight to the circuit is covered by trees, but at some places are inlets with seats from where you can see the track. Closer to the Tamburello is a statue of Ayrton Senna, looking to the site of the 1994 accident. Again a lot of flowers, pictures and letters on the fence. 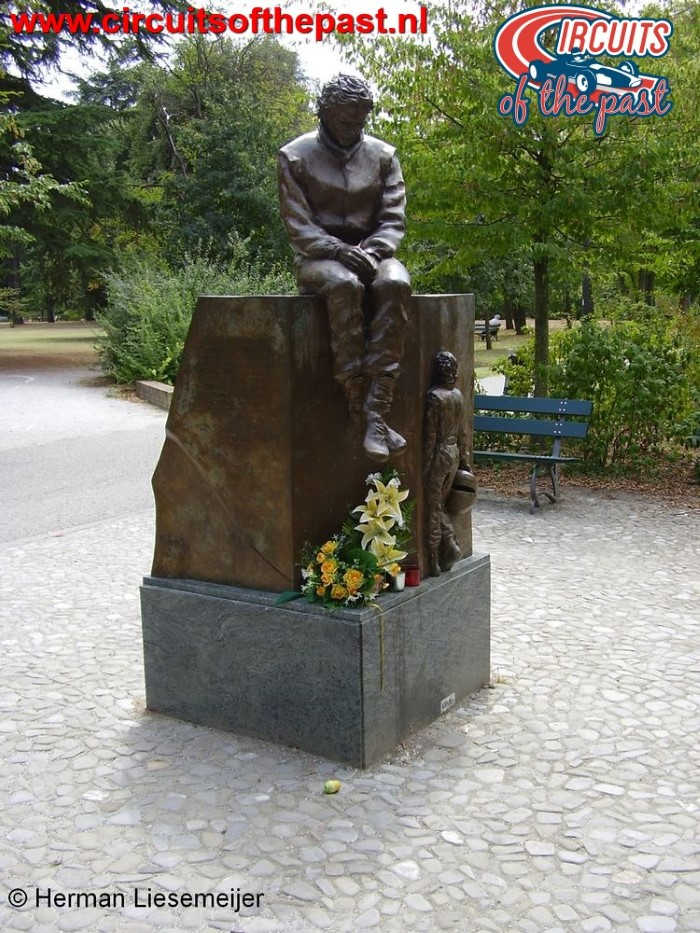 After I made some pictures, I walk to the chicane at the beginning of the Tamburello. Again it’s difficult to get a good sight at the track, because of the high fences and the many trees and bushes. From a little hillock in the park I have a view over the fence and could see the chicane.

Then I leaved the park and walked back to the Ayrton Senna grandstand where I parked my car. Before I would leave the circuit I drove to the direction of Rivazza to take some pictures. Remarkable is the site where I park my car, in front of a grandstand… 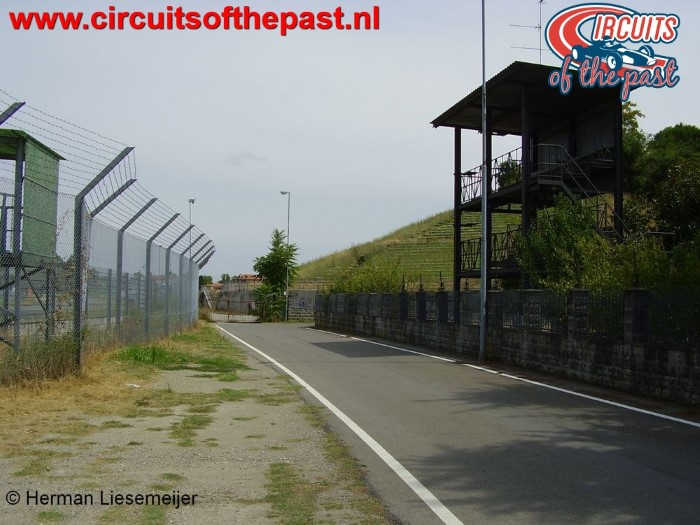 From this grandstand the spectators look at the site where the Variante Bassa was, just before Start/Finish. Between the grandstand and the circuit is a public road! A most peculiar race track. While I take pictures of the grandstands, the construction works and a rusty fence at the entrance to the famous hill at Rivazza, I saw a nice little self-made grandstand in the garden of a house. This must be a good place to life!

So that was the story about my Imola visit. Next time I will tell you about my visit to Pescara.