Népliget Budapest, the site of the 1936 Hungarian Grand Prix. An almost forgotten circuit in a park in the beautiful Hungarian capital on the Danube river. The first time I came in Budapest was in 1998. It was less than ten years after the fall of communism and the atmosphere of that time looked, at least in my experience, still there…

My first visit to Budapest in 1998

I stayed in Siófok, a touristic village at the Balaton Lake. Two weeks later was the Formula One Hungarian Grand Prix two which I want to visit. So I decided to take the train from Siófok to Budapest, to book a hotel room for the F1 weekend. Those days I never heard from an old race track at Népliget Budapest. 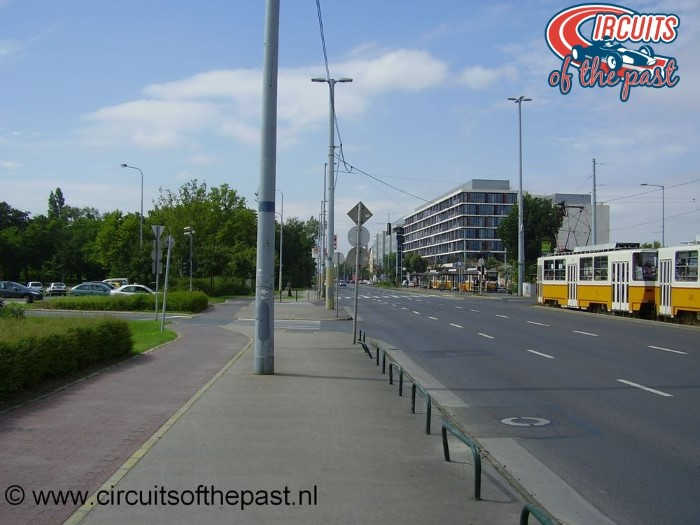 I arrived at the “Déli pályaudvar” which is Hungarian for Southern Railway Station. The station looked gray and sober. On the information office was a man with an oversized cap on his head, those whe know from pictures of the cold war. He did his job, giving information, on a very stoical way without any sign of emotion.

At the entrance I bought two metro tickets, one for the outward travel, and one for the return. Once on the platform I could feel that the train was almost there, by the wind produced by the train in the narrow tunnel. Aan old neglected-looking metro train came into the station. Once in the train, everytime we neared a station the lights go off for a short time which made it a real dark experience. Than I arrived at the city center.

Fined in the metro

When I came above a pretty Hungarian woman with a red belt on her arm was waiting for passengers to check their tickets. I showed her my metro ticket and she told me that my ticket was not OK. When I changed lines at Deák Ferenc Tér, the only metro station where the three metro lines of Budapest cross each other, I should buy a new ticket!

No pardon for the fact that it was my very first time in Budapest, I had to pay the penalty from 1000 Forint which was only 10 Guilders (About $ 5.- or € 4.50) at that time. Laughing about such a ridiculous fine I paid her 1000 Forint. So that was my first acquaintance with Budapest. 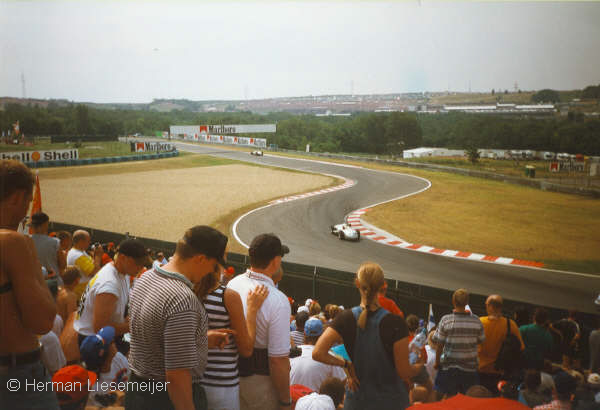 After I booked a hotel room I decided to have a look at the city. At the second sight I saw that is was a very beautiful city with very nice buildings, but also with abandoned buildings, laying on the Danube river. But the atmosphere was always reserved. No happy or laughing people on the streets. Despite, or maybe because of that, I was fascinated by this city.

That this city had more dark sides was something I discovered later during the Formula One weekend, when I almost lost my camera to a couple of pickpockets who created a trap.

Four years later I visited Budapest again. Workers where busy to renovate roads and buildings at that time and the city looked more sprightly than four years ago. This time I knew that there was a park in the city where they have held the 1936 Hungarian Grand Prix, named Népliget. Népliget is Hungarian for Peoples Park. 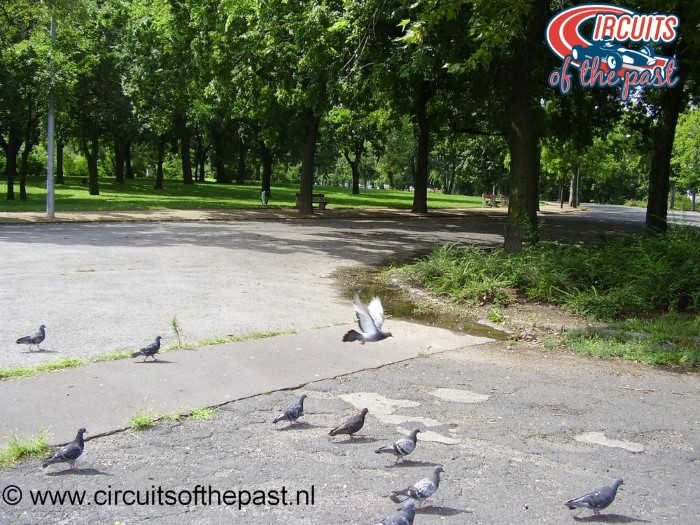 Enthusiast I made some pictures from Népliget Budapest. To photograph a whole lap, as I did at Nivelles earlier that year, was something that didn’t cross my mind at that time. I didn’t even know the layout.

A lap at Népliget Budapest

Eight years where expired when I visited Budapest again and meanwhile it was 2010. In the meantime I started the “Circuits of the past” website. So this time I should photograph a complete lap at Népliget Budapest! I choosed the 1936 layout (In the 70’s Touring car Races where held on a slightly modified track).

It’s not difficult to find the former race track. Arrived at Népliget Budapest, the way indicates himself nearly automatically. The park is split by a straight road in the centre of the park. Here was in 1936 the Start/Finish of the Hungarian Grand Prix. The two loops on both sides of the central straight are very twisty. I started my photo tour at the first corner. 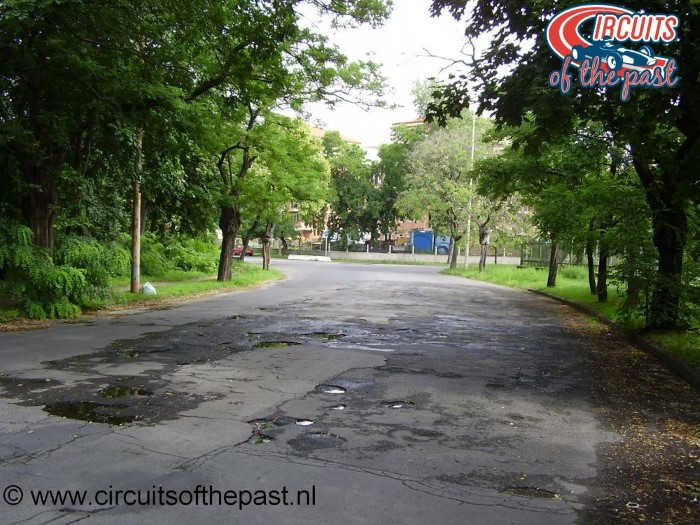 Short after the first corner I arrived at a section where road conditions are just terrible. It’s hard to imagine that drivers like Nuvolari, Rosemeyer and Caracciola have raced here.

A little bid further was an electric power station. Here was a short straight while the old maps show a wide curve here. Probably they have changed the road here a little bid to create space for the power station. Further in the park there is a wall beside the road where homeless people hang around. Not a pleasant place to take pictures…

Suddenly they scared me when one of them start to scream very load! I could not understand what he was yelling in Hungarian but it didn’t sound very friendly. I decided to ignore him and walked trough. 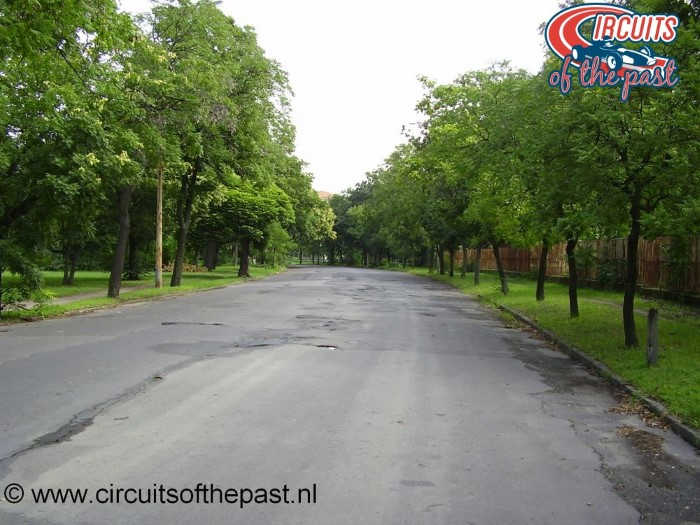 The second loop of the track was more busy than the first one, where only a screaming vagabond disturbed the peace. Here was also the Planetarium of Budapest and it was the only part with some elevation at this flat circuit.

After an almost never ending left hand corner I arrived at a junction. In 1936 they go right here, but in the seventies they turned left to the new Start/Finish. Because I follow the 1936 circuit I went right. After a short straight I ariived at the final corner, leading to the long main straight. This corner has two variants. A rectangular corner or a faster version. 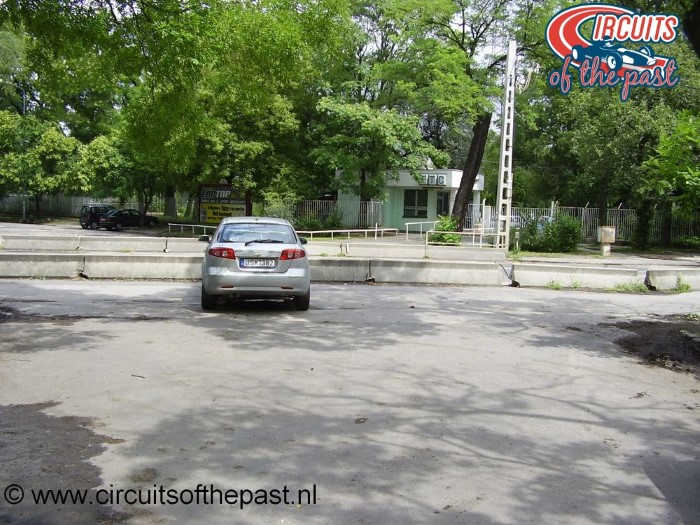 A small road cut the corner here. But according to the old maps they used the rectangular corner in 1936. Probably the short cut has been built later for traffic, while the original corner is closed at the end. After a walk on the 750 metres short main straight, my lap was ready and I took the tram to my hotel. After this 5 km (3.2 Miles) long walk trough the park I deserved a little rest.

Do you want to see the complete photo tour I made? Check “1936 Hungarian Grand Prix Circuit“. Or do you want to read the history of Népliget Budapest? Check the main article about the forgotten Népliget Circuit.

So far my report about my visits to Hungary and Népliget Budapest. I hope you enjoyed it. If so, comments are appreciated! 😉