Do you still think about long straight through the woods when you hear the name Hockenheim? Many people look back with melancholy to the old circuit of Hockenheim. This page describes the history of this particular race track, in the South West of Germany, from the first “Dreieckskurs” to the current “Hockenheimring Baden-Württenberg”.

The origination of the Hockenheim Dreieckskurs

Despite to what many sources claim, Hockenheim is not built as a test track for Mercedes. The original circuit was the dream of assistant timekeeper Ernst Christ, who came in 1930 to the idea that a circuit should be built in his hometown Hockenheim in the South West of Germany. 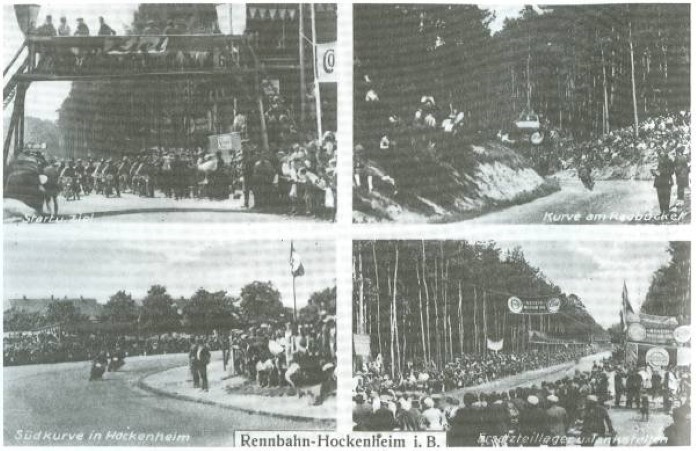 For this idea he got the support of the mayor of Hockenheim, Mr. Philipp Klein, and the German Motorsport Association who promised to organize races on the circuit. On the 25th of December 1931, the town council of Hockenheim gave permission to build the circuit.

Workers are deployed through a job creation project and get started on the 23rd of March 1932 with the construction of the 12 km (7.45 Miles) long “Dreieckskurs”, which is German German for Triange Track.

Actually they extended two excisting roads. So the first version of the Hockenheim Circuit was a full street circuit. Because there was not enough money for the surface, the first motorcycle race, on the 29th of May 1932, was held on an partly unpaved track. 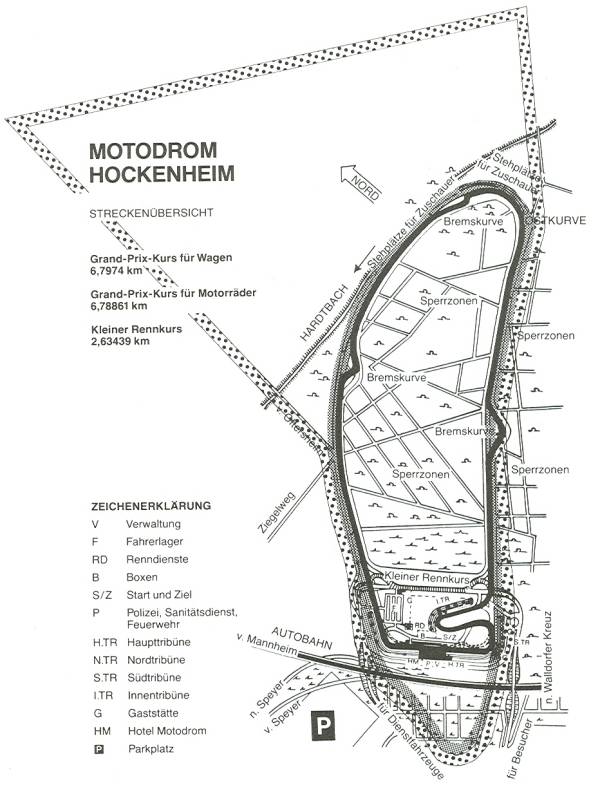 The map above shows the old versions of the track until 2002.

The lay-out of the Hockenheim circuit

The circuit, which was driven anti-clockwise, had roughly the shape of a triangle, therefore it was called “Dreieckskurs” (Triangle Course), and was characterized by its long straights. In 1938 the circuit was shortened to 7,692 km (4.78 Miles), when the Ostkurve was introduced, and widened from 5.5 meters to 8-9 meters.

The track had now the famous oval-shape that should exist until 2001. Furthermore, they renamed the circuit to “Kurpfalzring“. The driving direction was still anti-clockwise! 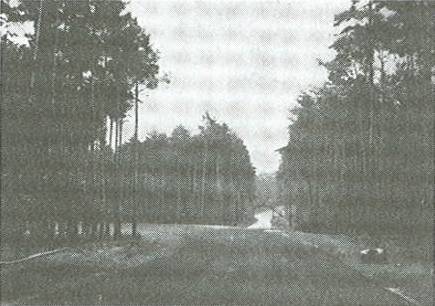 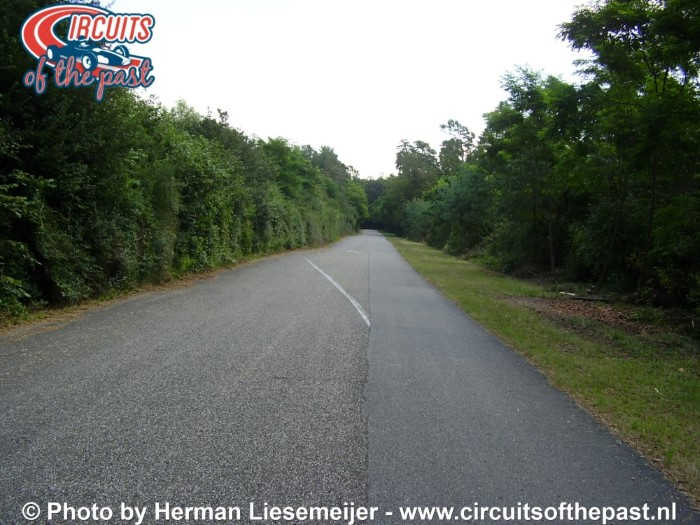 Short after the opening of the new track the Second World War broke out and motor racing stopped. During the war the surface was badly damaged because allied forces drove with their tanks on the circuit.

When the circuit was repaired it was renamed to “Hockenheimring“, which is German for Hockenheim Circuit. The first post war races in Germany where held here on the Hockenheimring on the 11th of May 1947. 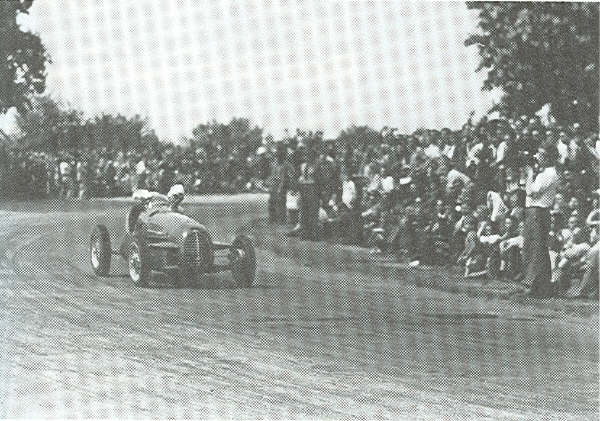 Hans Stuck Sr. in action during the first post war race in Germany.

The construction of the Motodrom

In the sixties there was a new freeway planned over the Western part of the circuit, which necessitates a reconstruction of the track. Dutchman Hans Hugenholtz (also known as John Hugenholtz) designed a new section in a stadium, inspired by the Indianapolis Motor Speedway, the so called Motodrom (Motor-stadium). 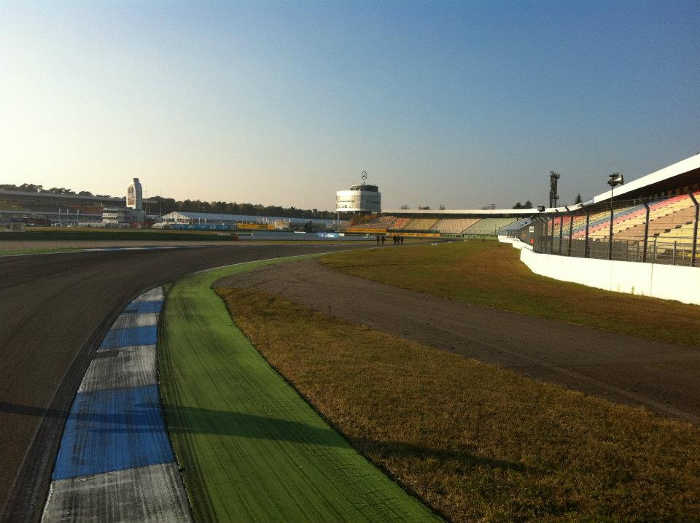 In 1964 the construction of the Motodrom began in 1966 and follows the opening. From that moment on, the Hockenheimring was a full permanent race track. They also changed the driving direction from anti-clockwise to clockwise.

Characteristic for this 6.769 km (4.2 Miles) long version of the circuit was the contrast between the lonely long straights through the forest and the twisty section in the crowd packed stadium. 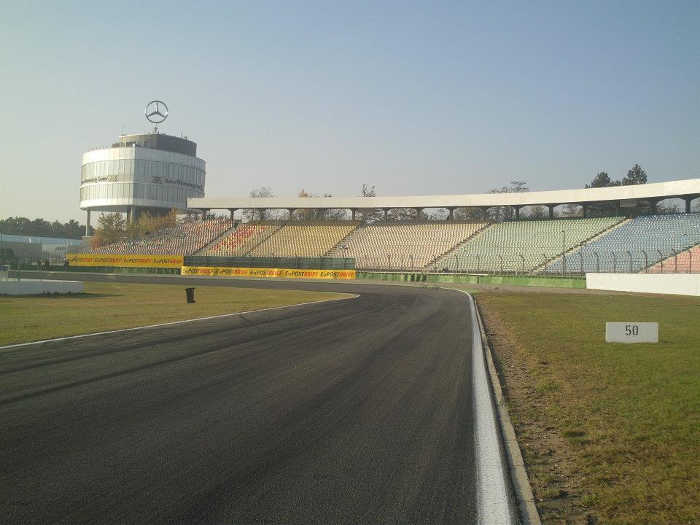 The accident of Jim Clark

The 7th of April, 1968 was a black day in the history of the Hockenheimring. On this day the legendary two-time Formula One champion Jim Clark lost his life here on one of the long straights during a Formula Two race. For many people Hockenheim will be associated forever with this tragedy. 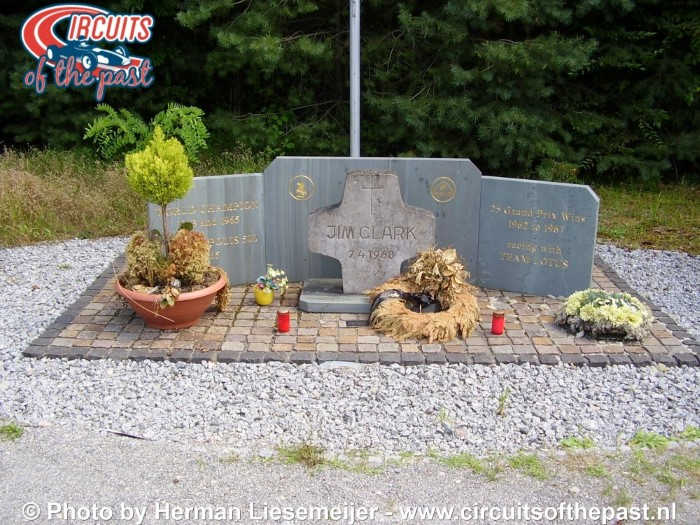 Formula One at Hockenheim

In 1970 two chicanes where constructed halfway both long straights to enhance safety.

Because of safety problems at the Nürburgring the German Formula One Grand Prix was held that year at Hockenheim for the first time. This race was won by Jochen Rindt who died after a crash at Monza later that year and became posthumously World Champion. 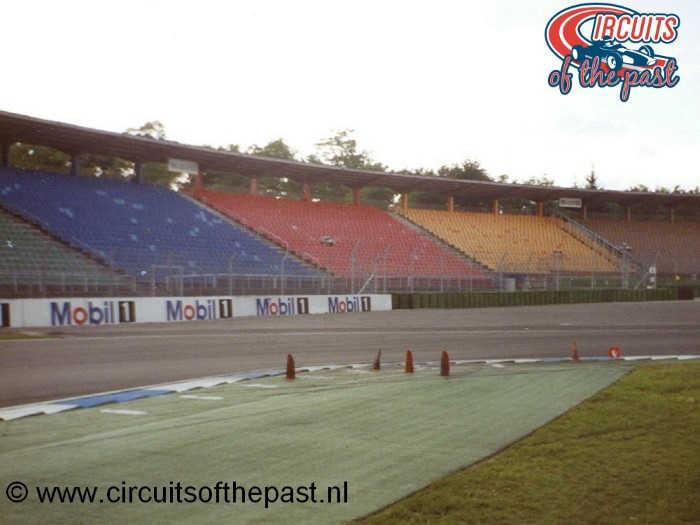 The chicanes of old Hockenheim

In 1982 a third chicane was constructed at the Ostkurve. The three chicanes where changed several times during the years.

Until 1994 they where originally named Bremskurve 1, 2 and 3 (Chicane 1, 2 and 3). There where also different variants of the first and last chicane for car races and motorcycle races. The Ostkurve chicane was only used for car races.

The last big changes on the chicanes were after the tragedies during the San Marino Grand Prix weekend in 1994. The first and last chicane where made slower and renamed to Jim Clark Chicane (The first chicane), this one was close to the spot where Jim Clark had his fatal accident, and the Ayrton Senna Chicane (The third chicane). 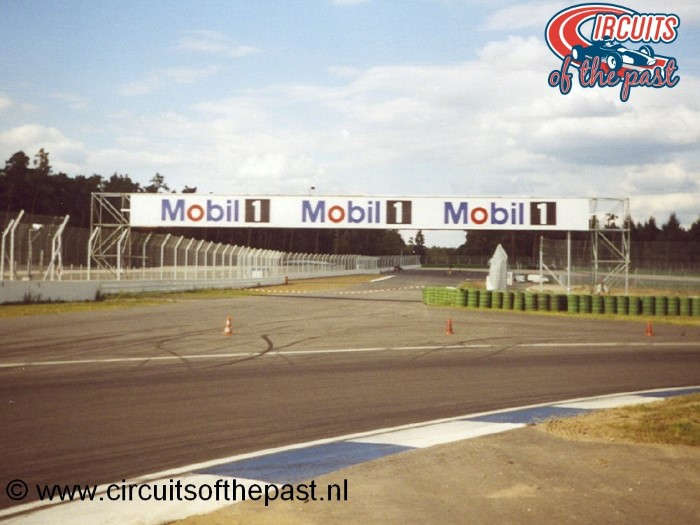 In 2002 I drove at the Club Circuit of Hockenheim. You can read that story in “My experience at the Hockenheimring Kleiner Kurs“.

The end of old Hockenheim

There are rumours that old Formula One boss Bernie Ecclestone said that the circuit should be shortened to make the spectators see more action. However, this was a misinterpreted comment from an employee of Ecclestone.

The initiative to change the track came from the circuit bosses themselves. In the late 90’s Formula One was very very populair in Germany, because of the successes of Michael Schumacher. That made more circuits were interested to organize the German Grand Prix. The most formidable competitor was the brand new Lausitzring.

Initially, there where plans to create a shortcut between the first and the third chicane. But later they decided to rebuild the circuit dramatically. The German engineering company of Hermann Tilke designed a complete new part that replaced the section with the long straights and the Ostkurve.


In this German-language documentary it is explained what led to the renovation of Hockenheim and the financial consequences thereof.

Initially, Hermann Tilke presented a plan to modernize the existing circuit. But the circuit bosses wanted from a long circuit to a compact circuit. Many fans hold Tilke responsible for the disappearance of the old Hockenheim. But this is actually not fair!

For the construction of the new section, many trees had to be felled. To compensate the lost trees, the old circuit was demolished to plant new trees on the lot. This was the end of the charactaristic oval-shape of the Hockenheimring. Instead, an ultra modern compact circuit. 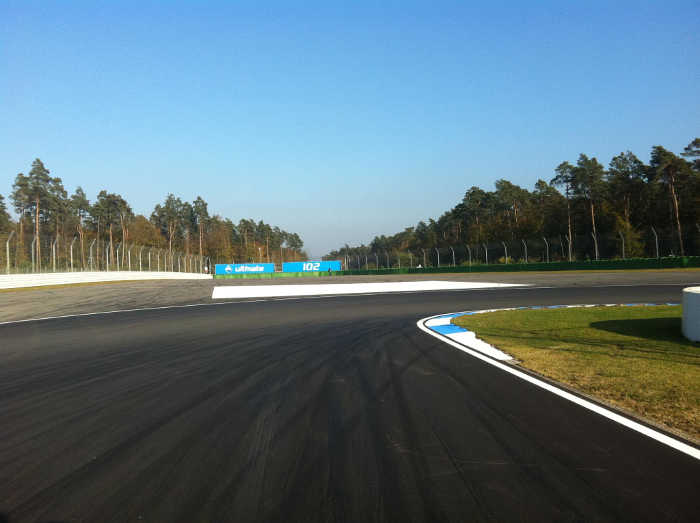 Memories to the old Hockenheim circuit

The old Hockenheimring was perhaps not the most technical circuit, but after all it was a very typical circuit which was a big test for the engines. It also was a circuit that gave, just like Monza, some variation to the Formula One calendar.

Think about the Grand Prix in 1994 when Gerhard Berger won the race in his Ferrari, at that time way too slow on most circuits, because of the brutal power of his V12 engine! Today, Hockenheim is just a circuit like all the other ones on the Formula One calendar. 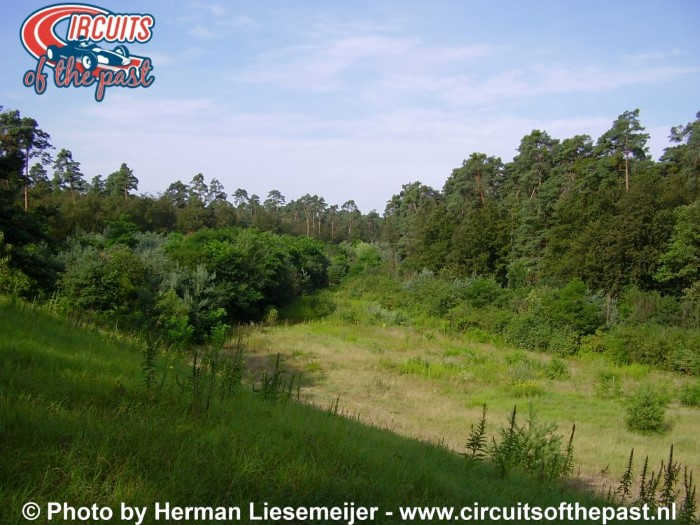 Once upon a time there was the Ostkurve…

The remains of old Hockenheim

The shortened straights, exit Motodrom an entrance Motodrom, are the only sections of the original Dreieckskurs (Triangle-course) who are part of the current circuit.

The old part trough the woods is still recognizable because of the young threes. But after some decades, only the Jim Clark memorial will remember to the times that here one of Europe’s fastest race tracks ran through the forest. 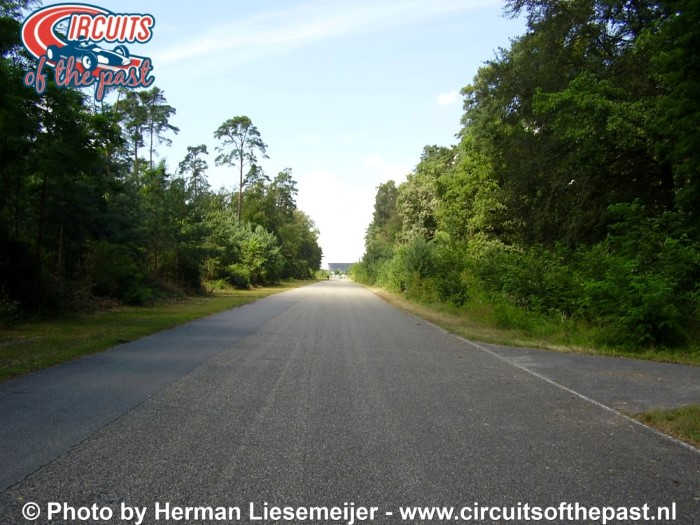 The straight from the Ostkurve to the Senna Chicane is still there.

Was the reconstruction necessary?

Ironically, the circuit came in financial trouble because of the expensive reconstruction in 2002! One moment it looked even that Formula One would never return to Hockenheim because the costs where higher than the profits.

A solution came when Hockenheim made a deal with the Nürburgring to alternate the German Grand Prix between both circuits. But also the Nürburgring was in financial trouble and after 2013 they lost the F1 race. Since 2014 there is a German Grand Prix only once in the two years at Hockenheim. So, now you can ask if that reconstruction was necessary for a race which is only held every two years!