On my Circuit Tour in 2016 I visited a special motorsport location, the Rosemeyer Parkplatz (Rosemeyer Parking). In 1938 German racing driver Bernd Rosemeyer died here after a crash during a record attempt. But first I would visit the nearby abandoned Opel-Rennbahn (Opel Test Track)… 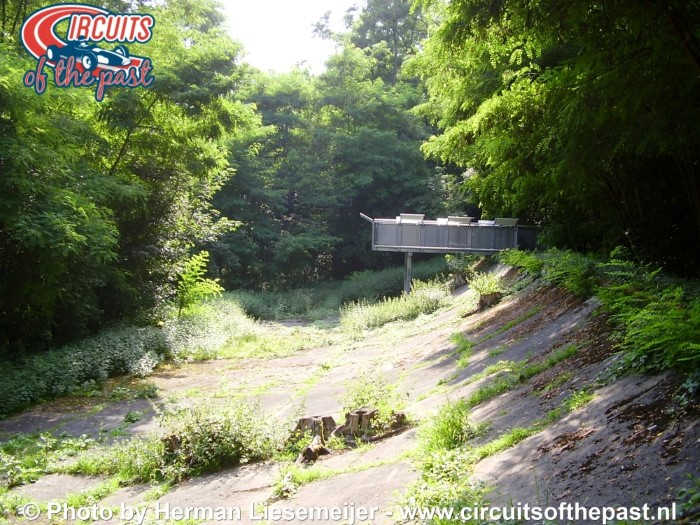 After I started my Circuit Tour 2016 on July 25 at the Nürburgring (See my blog post “Green Hell (Nürburgring) Track Visit 2016“), I drove further South to Rüsselsheim.

Here I would stay for the night. Actually I planned my visit to the Opel-Rennbahn and the Rosemeyer Parkplatz for the next day. But because everything went smoothly, I had enough time to visit the old Opel Test track on the same day.

After I checked in at the hotel and eat something, I went to the Opel Test Track in the early evening. It was the second time I visited this abandoned and overgrown old test track of the Opel factory. 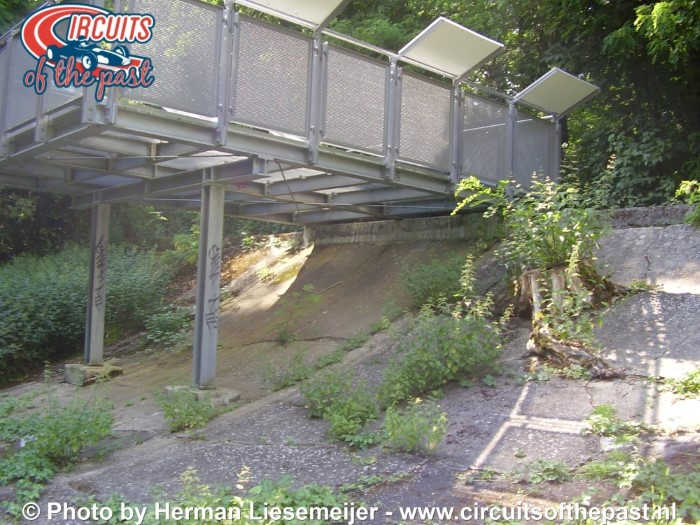 The first time was in 2010 (See my blog post “Opel Test Track 2010“). Compare to then, the weather was beautifull today. After I parked the car I walked into the woods in the direction of the circuit ruin.

A short walk brought me to the viewing platform, which was under construction during my 2010 visit. After I enjoyed the view, and filmed an photographed from ten platform, I enter the walkable part of the abandoned race track.

Here also a lot of filming and photographing. This time I also want to film a walking tour around the abandoned race track. I followed a forest path on the outside of the high banked corner on the north side of the track.

At some places I climb on the banking to film the overgrown race track. But then the banking ends… The next part of the circuit was demolished to create space for a new public road, which runs exactely on Start/Finish.

I continue my tour on a narrow forrest path on the infield of the track into the direction of the southern banked corner. I’m looking for the point where the old track contiunued. That point was not accessible, but I came close to it.

After some filming on the inside of the banking I follow the path on the outside with running camera. The path runs parallel to the old Opel Test Track and at some places it is possible to climb on the banking and have a look at the overgrown track.

After a brisk walk I’m back at the observation platform where I started the track walk. It’s time to say goodbye to the Opel Test Track and go back to my car. In the car, I mount the camera behind the windscreen to make an onboard of the Start/Finish section.

More information about this track in the main article: Opel-Rennbahn – The old Opel Test Track >> 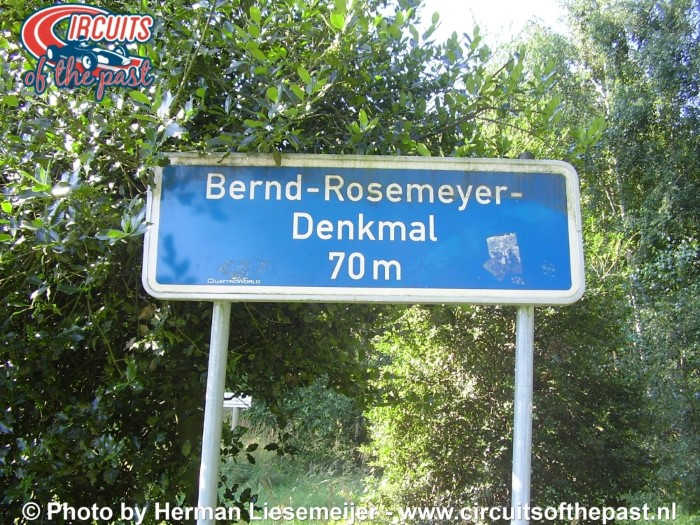 After I spent the night in a hotel in Rüsselsheim it is time to travel further, after the breakfast. On the programm is a visit to Hockenheim, but first I visit a parking along the Autobahn (freeway), which was known until 2014 as the Rosemeyer Parkplatz (Rosemeyer Parking). 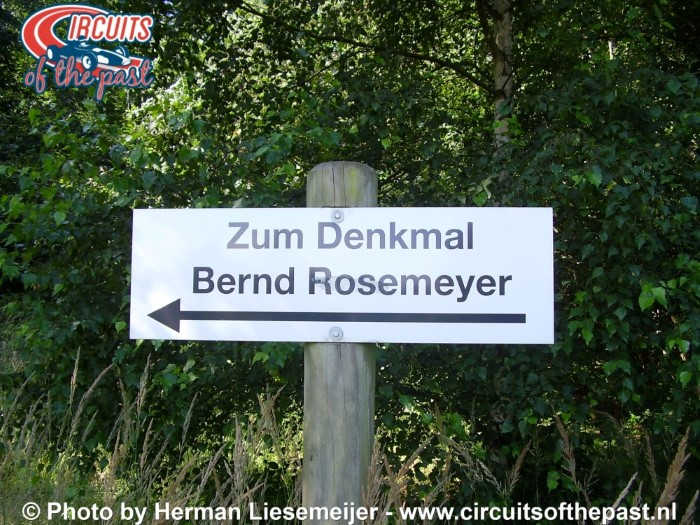 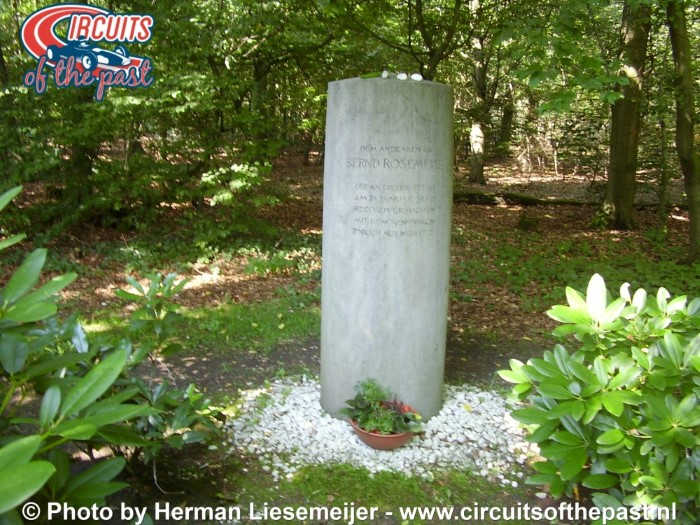 On this section of the Autobahn A5 the German racing driver Bernd Rosemeyer died after a high speed crash during a record attempt on January 28, 1938. For this occasion the freeway was closed for normal traffic. With his Auto Union he drove back and forth between the Frankfurter highway crossing and exit Darmstadt.

The freeway was flanked with woods on both sides. Probably because of the flight paths of the nearby airport, on some places were empty strips between te woods. This open strips are ideal to create wind gusts on the freeway. Rosemeyers Auto Union was caught by such a gust of wind at a speed of 430 Km/h (269 Mph). 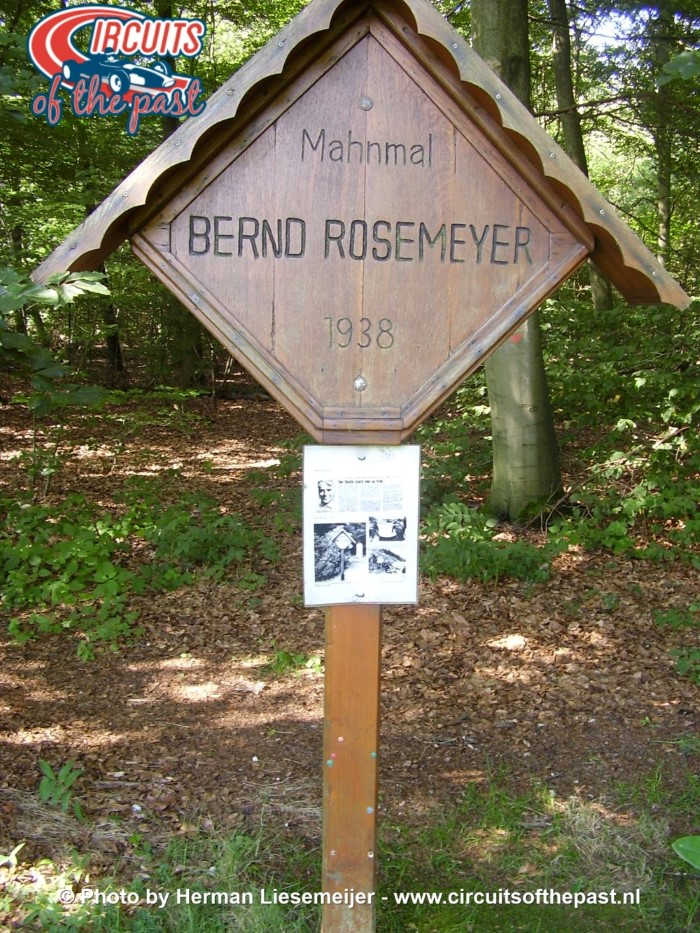 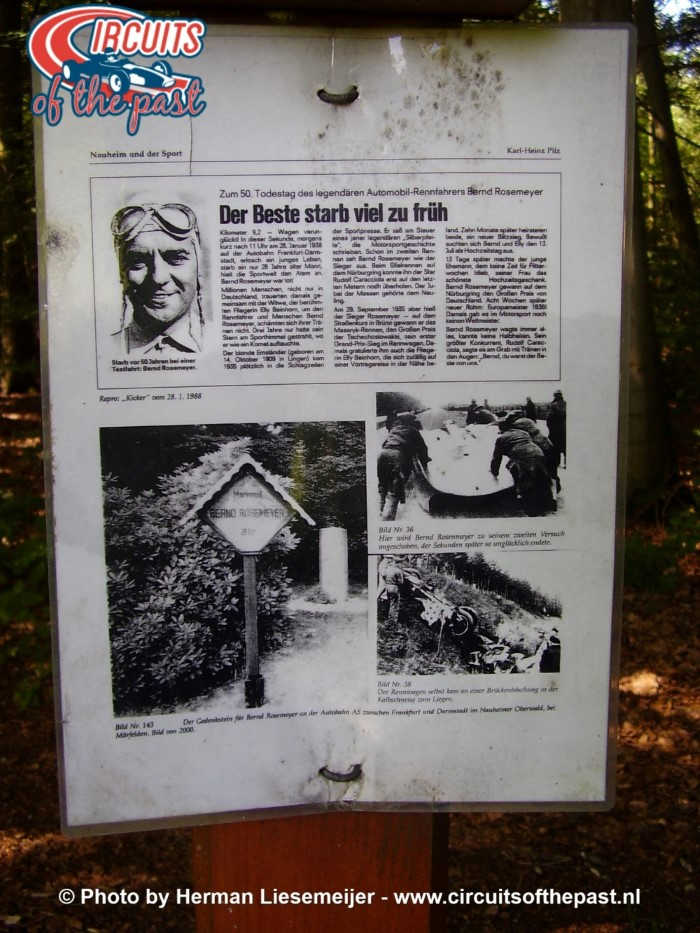 Rosemeyer lost control and at that speed there was nothing he could do to prevent a crash. His Auto Union rolled into the woods and cut down several trees. On the site where Rosemeyer his body was found is now a colomn. His car was found a few hundred metres further on the ambankement of a bridge over the freeway. Because the freeway was widened later this site is now on the freeway.

The Memorial on the Rosemeyer Parkplatz

With the camera behind the windscreen I enter the small parking along the A5 Autobahn. I park my car near the sign that indicates the site of the Bernd Rosemeyer memorial. With running camera I walk into te direction of the memorial. After filming and photographing the memorial I took a moment of silence.

Walking back to the car I see condom packaging in the trees. It seems some people can’t behave respectfull near a memorial…

Arrived by the car, I mount the camera behind the windscreen again. When I exit the Rosemeyer Parkplatz I film the site where the wreck of Rosemeyers Auto Union was found. Then I continue my way to Hockenheim. But more about that in another blog post.

So far my blog post about my visit to the Rosemeyer Parkplatz and the Opel-Rennbahn. I hope you enjoyed it. If so, comments are welcome! 😉 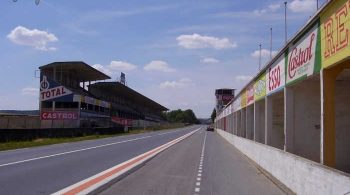