After I visited Nivelles and Chimay (both in Belgium) in the morning of this first of August, I traveled to the North of France for the third destination of this day. The abandoned Circuit Reims-Gueux…

The shortest way was over country roads, but unfortunately traffic was regularly held up by slow tractors. When I started to get hungry at noon and was stuck behind a tractor again, I just passed a restaurant. I decided that this was the perfect moment for a break. 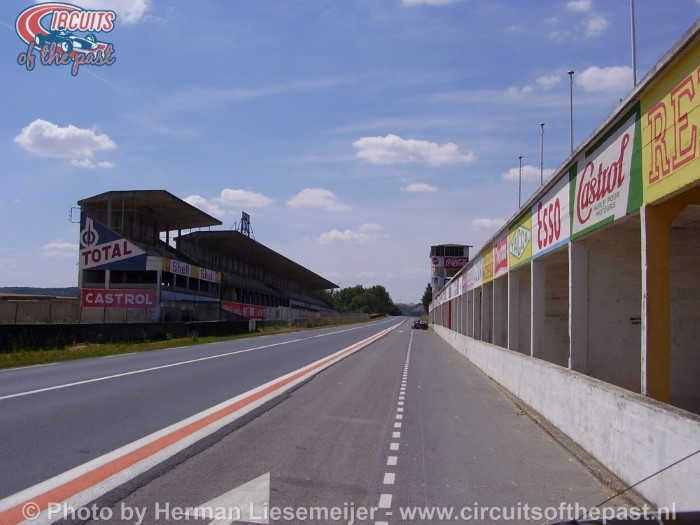 In the afternoon I arrived at the site of the old Circuit Reims-Gueux, and parked my car in the pits. The first time I came here was ten years ago on the eve of a revival. Near Pavillon Andre Lambert (in which was an exhibition during the revival) I started the recording of an Urban Exploring video of the old circuit buildings. Via the pits and the paddock I walked to the most spectacular building of the site, the old pit building.

Arrived at the pit building I saw three man above the pits, looking to the old Start/Finish area. I tried to keep them out of the picture as much as possible while entering the second floor of the restaurant. After I filmed the empty building I take the stair to the next floor. This was a scary stair because the banister was rotted away over the years. After I filmed this floor too I went to the top floor.

With running camera I take the next stair. This one is even scarier because not only the banister was gone, this stair was also littered with junk. A single misstep could kill me. Pressed against the wall I walk towards the top floor. Here I also film the empty interiour and the great view at Start/Finish and the grandstands.

This building seems to be a popular hangout for the local youth, as evidenced by the inscriptions on the walls. Next to the entrance is a huge hole in the roof and as a result, there is a huge damp patch on the wall. I hope the foundation “Les Amis du Circuit de Gueux” (“Friends of the Gueux Circuit”, the foundation who restored the circuit buildings) will repair this to prevent further decline.

When I went back down again I see the three men still watching the grandstands. I decide to have a chat with him. Two of them speak English which made the conversation more easy. After we talked about the history of the circuit I hand them a business card of my website. 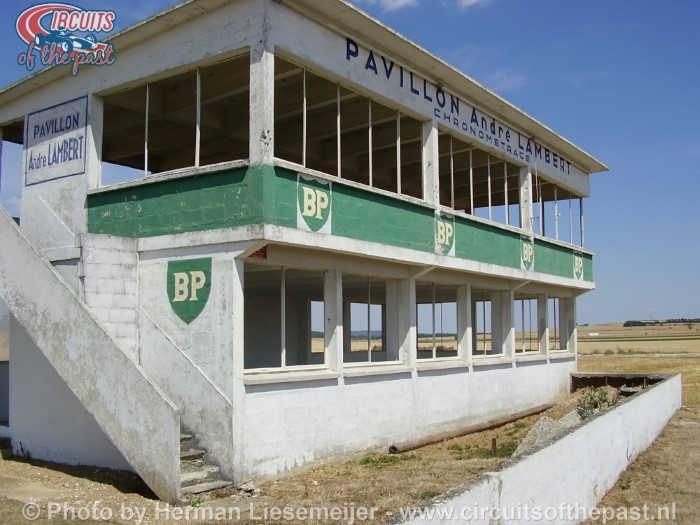 The next thing I would do was a walk with running camera through the tunnel to the other side of the track. During my first visit in 2005 you could also enter the grandstands. But unfortunately, this time the entrances where closed. So I went back to the car to start filming the onboard videos of all three versions of the circuit.

The first two versions where easy, because the roads are only slightly modified. But the last version of the circuit is a total different story. Short before the old Muizon Corner the road ends in the wheatfields!

For the continuation of the lap I had to make a long detour. On the N31, the long back straight, I turn in the oposite direction to Muizon. A part of this road is now a divided highway, but another part is stil the original two lane road it was in the glory days of this circuit.

I see to my delight that here are still a few strips of asphalt of both versions of the Muizon Corner! A little further I find a suitable place for a U-turn and I drive back in the right direction.

The speed limit is here 90 Km/h, which i do exactely, just like the car in front. I keep some distance in order to have a clear view of the track. When we enter the part which is now a divided highway, a motorist behind me decided to ovdertake me. He does this with a 1 Km difference in speed, wich makes it a very long overtaking maneuver.

When the speed limit goes up to 110 Km/h, I hoped he would accelerate and stay out of the picture. Instead of that, he goes to the right lane at low speed and block the view on the track! I had no desire to drive back and start again, so I changed the lane and put the pedal to the metal!

More about the History of Reims-Gueux in the main article >>

After the three laps I do some video shoots in front of the grandstands. While I do, a few motocycles pass at high speed, which results in some funny footage.

Finally I film the big scoreboard and the petrol tower. Next to this tower they placed an old fuel pump. With some sense of humor they put the fuel price indicator on 6.66 French Francs per liter.

It was already late in the afternoon When I was done filming. Time to go to my hotel. The next day I would go back to Belgium and visit the circuit of Mettet. 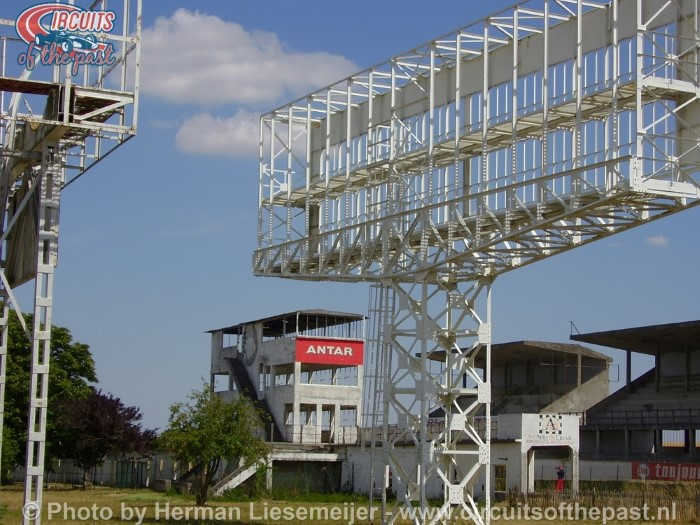 I hope you enjoyed my blog post about my 2015 visit to Circuit Reims-Gueux. If so, comments are welcome! 😉