It was Thursday morning July 28, 2016 when I leaved my hotel in Mannheim (Germany) and drove in the direction of Stuttgart. For this day I had two track visits on the programm, the Solitudering and the Norisring. 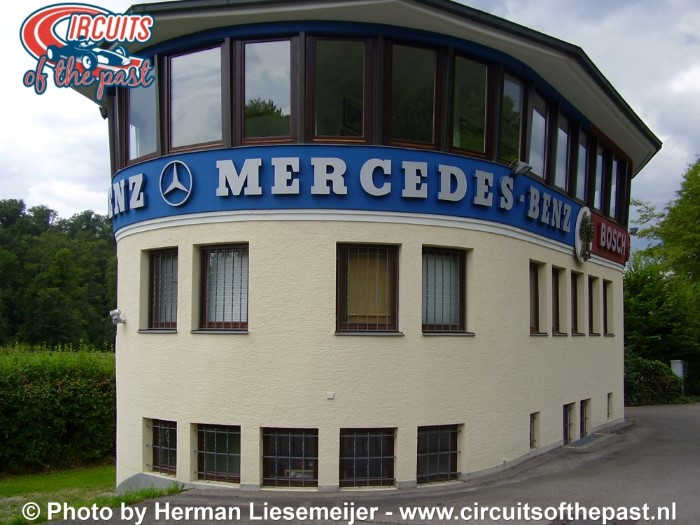 The first ten years they changed the track almost every year. But in 1935 it became its definitive shape, with a length of 7.08 Miles/11, 4 kilometers. The track ran in a natural way though the rolling landscape and included a few steep sections. Most corners were very fast but the track contained also a few very slow corners.

Except a very beautifull race track, the Solitudering was also a very dangerous track. For this reason the Ministry of Internal Affairs banned racing on the Solitudering.

My visit to the Solitudering

After a one hour drive I arrive by the old control tower, which looked like new. I parked my car near the entrance of the ADAC Proving Ground, which is on the old Start/Finish straight. Here I mount the camera behind the windscreen to film a lap on the old street circuit.

With running camera I drove over Start/Finish in the direction from wich I arrived. On the intersection I turn left, and than the real work begins. From here the track goes uphill. I arrive at the Hedersbachkurve (Hedersbach Corner), which is a very long and steep right-hand turn. It reminds me to the Raidillon at Spa-Francorchamps, only slower.

The track is climbing further to Hedersbach Ebene (Hedersbach Level), the highest point of the street circuit. A series of fast corners brings me to another intersection were I turned left to enter the fastest section. On the map it looked almost a straight, but in real there were a lot of very fast kinks.

After this 2.5 Mile high speed section I arrive at Schatten, one of the slowest parts of the Solitudering. This section contains two hairpins short after eachother. This must have been a big braking point with many overtaking.

After the Schatten section I arrive on a roundabout which is not on the map. I take the most lochical route for me, but soon I discover that I took the wrong exit. After a small detour I’m back on the roundabout to take the right exit and continue my way on the Solitudering.

The last part of the lap contains an almost endless series of fast and medium fast corners. This was without a doubt the most technical part of the Solitudering.

Then suddenly the control towers comes in sight and my lap is complete. I park the car and remove the camera. I need the camera to make a few shots of the control tower. When I’m done filming it’s time to leave the Solitude ring and go to my next destination, the Norisring in Neuremberg. But more about that in my next blog post.

So far my blog post about my visit to the Solitudering. I hope you enjoyed it. If so, comments are welcome! 😉